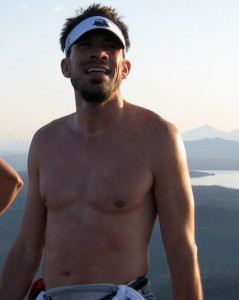 Rogue Valley Runners in Ashland, Oregon is arguably the capitol of ultrarunning in the US these days.  Sorry Seattle Running Company and Auburn Running Company, but have you seen the caravan of ultrarunning gypsies that owner Hal Koerner has assembled down there?  Let’s see, there’s Ian Torrence, Erik Skaggs, Kyle Skaggs, Tony Krupicka, and the Western States 100 defending champion himself, plus a couple of solid, but lesser-accomplished runners (sorry Ixel, Chris, and Darcy).   It’s a great place to buy shoes or just hang out and chat with the boys.

After being told by Hal at the Southern Oregon Fat Ass 50K on the Rogue River trail in January that he was glad I was in front of him for the first three miles so he could “practice his 72-hour pace,” I was actually speechless.  He got me good and I had no response.  But when I finished an hour or so after him, I warned him that his time will come just like AJW and Twiet.  Well, Hal, it’s come.  Here are the top ten things you might hear at Rogue Valley Runners.  All quotes are from Hal unless otherwise noted.

10. “Seriously guys, do these Moeben Sleeves without a shirt make me look fat?”

9. “Can you believe that I’m the defending WS champion and I still don’t get any respect?” (see AJW’s poll where he was 5th)

8. “Hey Hal, how many races are you going to drop out of this year? You should try to break the all-time record.” [Kyle] 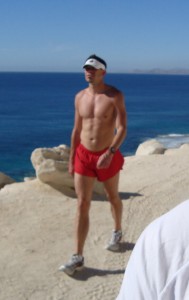 7. “Does anybody know what to do for plantar fasciitis?”

5. “Hal, are you and Ian going to grow some this year and sing karaoke at the Georgetown Hotel after Way Too Cool?  Carly and I were the only ones to represent Ashland last year which was really weak.” [Erik]

4. “Is it true that somebody from Eugene has won Way Too Cool two years in a row now?  Didn’t all you guys go down there last year?  Pathetic, guys.” [Kyle or Tony]

3. “Next time Thornley’s down here will you ask him to sign the photo we have of him on the wall?”

2/9 Update: In private communication with the defending WS champion, he acknowledged that he looked out of shape in the Where’s Waldo Fuji picture I included above.  So, to show me what he really looks like when he’s out of shape, he sent me the picture to the right and said, “this is what Western States champions do in the off season…….. Cabo, dirt, 90’s………good luck.”