You ever wonder why Tim Twietmeyer, the five-time champion with 25 sub-24-hour finishes, including a streak of 15 consecutive top-five finishes, and now president of the board, retired from racing Western States 100 in 2006?  Here are the top ten reasons. 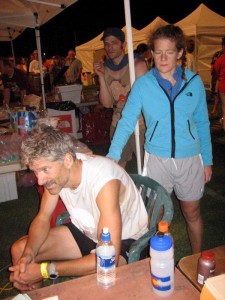 10. He ran out of belts for any new silver buckles.

8. He wanted to be The King of the WS Board of Directors to have the final say on who gets in via special consideration.

7. He thought running the full 200 miles of the Western States Trail from Carson City to Sacramento through fires and smoke would be cooler than the mere 100 mile section the race covers.

6. To have more time for important things like playing with his chainsaw and grooming his moustache.

5. He didn’t want to risk his sub-24-hour finish streak and end up with one of those yellow buckles.

4. So he could throw smack at us during the race, which he does very well.

3. Because I kept him out of the top ten twice (and he’s still hurting from the “double beat-down” I gave him).

2. So he could spend time figuring out how and building up the courage to leave a comment on Conduct The Juices.

I’m sure there must be more.