by Means of Western States 100, or the Preservation of Safety in the Struggle for a Finish

This post was originally posted in June 2009 as part of the synchroblog project.

As the sport of trail ultrarunning becomes more and more popular, the eyes of the world are beginning to notice us. And what do they see? A bunch of eccentric, whacked-out, non-serious joggers who must be running away from something. Have you seen what they say about us on Let’s Run? Just the other day there was a thread titled “Help.. I have an unnatural hate of ultra runners.”   The original poster concludes his first post with, “maybe it’s because the people have lost the intent of running fast, maybe it’s because it attracts weirdo’s and hippy[sic] types, maybe it’s because it’s people taking the act of running to the extream [sic] rather than working on getting faster…” OK, so he can’t write, but even people who are literate have expressed a similar disdain for us. Just the other day I was in the dentist office and he stopped working on me to tell me he was reading a book about ultrarunning…  Yes, that one. Oh yeah, that was a fun discussion as I tried to convince him that we don’t all order pizzas while we run.

It seems as though there is no middle ground. Either people are in awe of what we do or they hold us in contempt. But why the contempt? Perhaps part of it is due to that book that came out a few years ago that sensationalized eccentric ultra “stunts.” Maybe it’s because it is just impossible for even a 4-hour marathoner to comprehend how someone can win the biggest 100 miler in the world at not much better than 10 minutes per mile pace and still call it a running race. Maybe it’s because normal people instinctively know that running 100 miles just can’t be good for you. Are we runners or jog-walkers? Do we participate in running races or survival tests? Isn’t a marathon far enough? Were you dropped on your head as a child?

What do we have to do to be taken seriously? Or should we even care?

I suspect one aspect of our sport that is hard to overcome in the eyes of “real” runners is the concept of a pacer. You know, the person who runs with you the last 30+ miles of a 100-mile “race.” For what? To pick up your body when it can’t go anymore?  (I’ve only seen this happen once.) To hold your hand and protect you from the bogeyman in the dark? (For some runners this is true.) Road runners don’t need pacers – I never needed one in any of the 15 marathons I’ve run. But even within the ultrarunning world there is a wide range of opinions as to whether pacers should be used or not.

So why do we have pacers in 100 milers? Of course, as with most of our traditions, it all started with the Western States Endurance Run. Shannon Weil, co-founder and original co-race director of WSER recalls, “The idea of pacers began back in 1978 of the WS100. Running 100-mile races lacked significant data and we felt it was prudent to allow entrants to have pacers after Foresthill to increase their chances of making it to Auburn. It was purely an optional safety measure in the beginning.” That seems reasonable, but what is a pacer at Western States used for today? Andy Jones-Wilkins, five-time WS finisher says, “While I know the original purpose of the pacer was runner safety, I must admit I use a pacer solely as a result of competition.” Not for safety? OK, maybe for the fast guys like AJW, but what about the 27-30 hour runners, they surely must use them for safety? My brother, Chris Thornley, who has one 28-hour WS finish and five total 100-mile finishes, all over 27 hours, agrees. “I don’t need a pacer to keep the bogeyman at bay. I’m not afraid of the dark. I expect my pacers to push me just a bit. Get me out of the walk mode,” he says.

Other runners speak similarly of the role of their pacers. They use their pacer for competitive advantage. To help them get to the finish sooner. Hal Koerner, defending WS champion, describes what a pacer does for him:

“My pacers have always been a source of motivation when those lonely stretches become increasingly mundane, as well as an alarm clock for food and water intake,” he writes. “It’s hard enough to keep everything together at mile 26 so 76 becomes almost impossible. I also utilize my pacer for direction and locating course markings. Once again, a keen eye is always helpful when one’s faculties become diminished. I will also have my pacer set “the pace” routinely after Green Gate (when) I need 6 mph or something very close but extremely consistent. That is when they earn their worth, any fluctuations become energy absorbing and there’s not enough to go around to be foolish.” 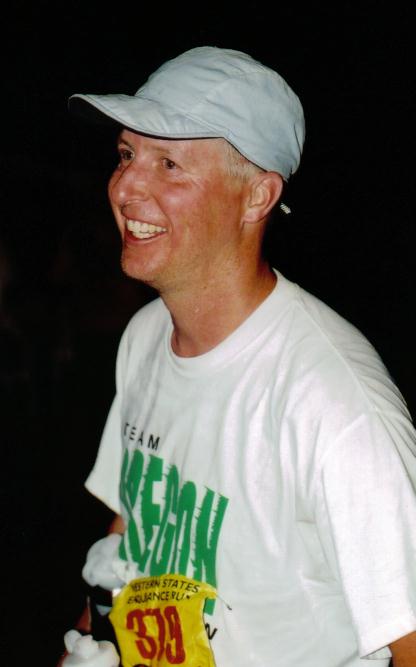 Does the use of a pacer take away some of the satisfaction of running 100 miles? For some, like Karl Meltzer, one of the most successful 100-mile runners in the country today, it does. “I like to do things on my own, and the challenge of doing it myself is more rewarding,” he says. So what is a runner like Karl to do at a race like WS? Pacers are allowed to do all that AJW, Chris and Hal want them for. They use them but Karl doesn’t? If purity is what you’re after then why stop at not using a pacer? Why not forgo using a crew or the aid stations and make it even purer? Both Karl and AJW said they would welcome that challenge, but let’s not stray from pacers. Karl is not in WS this year as he declined his spot from 2008, but he did tell me he wouldn’t use a pacer if he were running. Seems foolish to me when the rules of the race allow them. If purity is what you’re after then run races like the Plain 100, which only has a single aid station. Little aid. Little crew. No pacers. When asked if he thought less of runners who use pacers, Karl was pretty clear. “Absolutely not!” he said. “To each his own, and if the pacer is allowed in the race, I have nothing to say about it.”

Maybe we just shouldn’t care about what others think, either inside the sport or outside. 100-mile trail runs have evolved from very unique beginnings and using pacers is just one of those things that make them unique. It is not road racing so screw the road runners who refuse to embrace our sport. And for those inside the sport who don’t like them, find races that don’t allow pacers or create a race yourself and make your own rules. I’ve paced about 15 times and it is a lot of fun. Pacing has, as Shannon says, “proved to be an excellent introduction for new runners to have a first-hand experience of being on the trail during the race. Many future entrants begin their love for the WSER as pacers.” This was the case for me and my brother. “Pacing somebody in a 100-mile run can really change your outlook on your own life,” Chris says. “It’s like going to the doctor and getting a shot of “YOU CAN DO IT!!!” in your ass. Being with somebody and feeling the tremendous effort that is required for them just to get to the finish line is a gift.” I’m looking forward to spending time with my two pacers, Nathan and Chris, in 9 days.

This is the 5th and final installment of the 2009 Western States Synchroblog Project.  This is an open topic so we’ve got a wide range of topics this time.