Years ago I heard my buddy Ed Willson’s hash name was Mr Ed Sucks.  If you know Ed you should realize how good a name that is, because, well, it just is.  While I never joined the Hash House Harriers, their penchant for giving members interesting, usually crude names is right up my alley.  So, we started doing it for the ultrarunning crowd in Eugene and it’s become quite an honor to get a name.  While there aren’t any written guidelines (until now) and I don’t claim to be the expert on the topic, here is what I try to follow when naming a fellow ultrarunner.

So, given those guidelines, here are some of the names of ultrarunners in my circle of friends.  If I forget to list you then please comment and add your name and a brief explanation.  I’m not going to give their real names, but if you read this blog you may be able to figure some out.

Hot Newman – A spoonerism for a guy that isn’t like the rest of us.

Tan Mitts (a.k.a. AJizzleWizzle a.k.a. Three Names) – A spoonerism for a guy that should wear a bra, especially when he runs.

MonkeyBoy – This guy climbs like a spider monkey.  But the best part about this is that the guy who came up with this name used it in a very nasty sentence.  The name stuck.  He was formerly known as Three Gels.

Bilirubin – I have an AP question for you: If my stool is pale does that mean that my bilirubin count is too high?  Native American name is Pale Stool.

French Kiss – Named after the Sunsweet chocolate covered prunes she always has in her refrigerator.

Birthmark – There is a birthmark on the chest of his that doubles as a race number.

Floater – Vitamin (or is it mineral?) content of feces determines whether it floats or sinks.

Tapeworm – A skinny fast guy that eats like there is no tomorrow.  Oh, and he did have something growing inside him after a trip overseas.

Brewhahah – His unpronounceable last name begins with a B.

Cougarbait – He’s slow, fat, and juicy and runs with a knife strapped to his arm to fight off cougars. 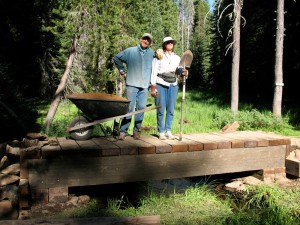 OD – The beauty of these initials is that it can stand for so many things: One Day (by 1.5 minutes), Old Dude, Outside Diameter (think fire hose), Odd Duck, but the original meaning was Overdraft because he hadn’t balanced his checkbook in years.