This was originally written in December 2008. I met someone tonight who mentioned an article about Ticer and a fox from some time ago. I said, “I wrote that.” So here it is again. 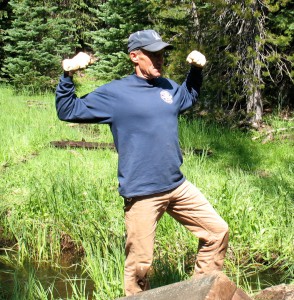 Did you hear about the Arizona woman who was recently attacked by a fox while out jogging?  Worried that the fox might be rabid, she jogged back a mile to her car with the fox locked to her arm.  When she got to the vehicle, she threw it in the trunk, then drove to the hospital.  The fox was rabid, so she had to get rabies shots. That story was floated around on the Northwest ultra list a while back.  The original poster was impressed by the woman’s toughness. I wasn’t.  Why not? Because we have Ticer.

John Ticer has set the bar so high for us in Eugene, that I can’t even think about dropping from an ultra for something as minor as a simple broken bone or bloody gash.  If it ain’t a mid-shaft femur fracture, I have to continue for fear of being called a wimp by JT.

“How does that rank in the Ticer scale of pain?” lc asks Ticer, who’s in a cast 4 days after breaking his foot, two thirds of the way through a local 50K. His response: “There is no scale.”

When the injury occurred, JT didn’t just drop like a normal human. He kept going for 9 more miles, shattering the bone in several places. We still don’t know how many times he fractured it. Ticer won’t tell us. We do know that he passed several more runners and finished 3rd in 3:57.

With a scar on his face from a chainsaw accident that nearly split his head in two, Hot Newman (that’s what we named him when we were in a spoonerism phase) is a gnarled, ripped, 52-year-old firefighter.  Known to eat only 3 almonds and a nectarine after running 40 miles around Mt Hood, he never seems to need food or fluid when the rest of us are begging him to stop for a hamburger on the drive home.  On the few occasions when he finally does relent, he usually settles for a cup of water while we gorge on Big Macs and Burrito Supremes.

One of the stories that best exemplifies Ticer toughness unfolded during the 2005 Western States. Having recently lost his father, he’s running with a picture of his dad on his chest. Nearing Cal 2, he trips and falls, badly hurting his finger. As Ticer tells it, he was thinking about his father, his eyes welled up with tears (apparently he does have a sensitive side), and he went down.  His finger is seriously messed up — there’s blood and bones showing — and he asks his pacer to put it back in alignment.  The pacer just about faints from the shock of it all but, somehow, he gets it somewhat straightened. They continue running down to the river where the medical folks want him to stop.  “I just need a popsicle stick and some tape,” he says as they try to convince him that this is serious enough to drop from the race.  “I’m a paramedic, I’ve seen alot worse,” is his response. His split on Cal St: 2:39.  He finishes 6th place in 18:03 and goes to the hospital the next morning to get X-rays and find out that it was only an open dislocation.  No big deal.  If we hadn’t noticed that his hand was all splinted and bandaged, we would never had known what happened.

The guy isn’t just immune to physical pain.  He’s a psycho too.  He runs huge mileage. Well, not Anton huge, but he has run 208 miles in a week on the Western States Trail.  And he thrives on training by himself.  One time in 2004, he’s getting ready for Javelina 100 and Bilirubin and I run into him on a local trail in the middle of the day.  He tells us he’s running 7 x 10 mile out-and-back —  70 miles or 12 hours, whichever comes first. Now, Eugene is loaded with people to run with.  If it were me, I’d be emailing everybody, asking if they’d run a lap with me.  Not Ticer.  He didn’t tell anybody.  Running alone makes him mentally tougher, and he thrives on it.  He also always does more than the rest of us.  We have a very hilly training run, Rooster Rock, that we use to condition our quads for States.  A single Rooster (two summits) has 4,500′ of gain (and same amount of loss) in 11 miles.  When I showed Ticer this run a few years ago, I told him I can only do a Double Rooster and my quads are trashed for a week.  What does Ticer do?  A Quad Rooster (8 summits, 18,000′, 44 miles).  Psycho?  Much.  Smart?  Not so much.  I’ve heard him say that when he gets to the starting line, he looks around and knows that nobody has trained harder than him.  I think he’s usually right.

Now, what do you think Ticer would do if a tiny little fox bit him during a run?   My response to the original poster of the email mentioned above: “If this had happened to Ticer, he would have killed the fox right there, eaten it raw, finished his original run at 6 min. pace, and not told anybody about it.  Oh, and he’d give himself the rabies shots.”