AJW has a poll on his new Keep It Simple AJW blog: What state is America’s Ultrarunning capital? 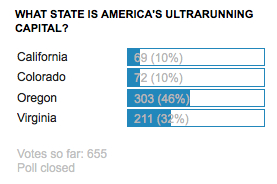 While there have only been 55 votes cast so far, probably because his huge fan base doesn’t know about his new blog yet, Oregon is leading with 42% followed by Colorado at 28%, California at 21%, and Virginia at 8%.  No other states are listed in his poll.  I’ve been known to poke a little fun at AJW once in awhile, and his polls are something I’ve mocked in the past.  But, I find this question interesting.  No, this isn’t a scientific poll by any means, and it is possible that a couple of tweets by Oregonians yesterday have swayed the results in favor of the Beaver State (as a Duck it is hard to write that).  That said, perhaps it’s worth exploring what makes a state a strong ultrarunning state?  Is it the total number of ultrarunners?  Number of fast ultrarunners?  Number of races?  History? Access to trails?  Climate?  Or is it something that is not quantifiable like community or passion or panache or chutzpah?  I doubt any of the people who voted thought about it much before casting their vote.  It was probably more of a visceral reaction.  I’ll admit that I went there and immediately voted (guess how I cast my vote?)

With the history and populations of California and Virginia one might think that hands down they would be leading, but they aren’t.  I wrote a post titled Oregon Ultra Domination a couple of years ago where I listed all the fast runners in three different regions of the state (Willamette Valley, Southern Oregon, Central Oregon). In addition to the fast runners, I listed the championship races and the Oregon Trail Series.  In the comments I sparred with a pesky Californian about why California was losing its edge.  Perhaps this question shouldn’t even be asked?  It’s not like there is anything to be gained by “winning” the first poll on AJW’s new blog.  That said, I will attempt to make a few generalizations about Oregonians:  We are passionate.  We don’t take ourselves too seriously.  We have fun.  We just get the job done. 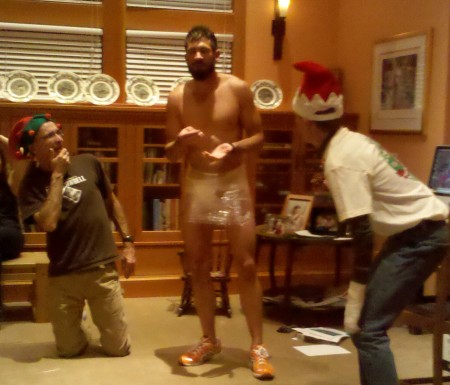