Update Jan 10, 2012: Ellie Greenwood and Dave Mackey have been named UltraRunning Magazine’s Runners of the Year for 2011.  Meghan was runner-up for the second year in a row.  I think the voters done good, but Meghan still is the most amazing ultrarunner of the year.

Last year Meghan Arbogast, at 49, arguably had her best year of running.  Two USATF national championships (Mad City 100k, White River 50M), 1st at Waldo 100K, 2nd at Western States 100, Montrail Ultra Cup Champion, a couple of other victories at Ice Age 50M, and McKenzie River 50K.  I wrote about The Queen’s year before she ran to a 5th place 7:46 at the World Championship 100K in Gibralter.  Oh, and we can’t forget about her 2:45 and 2:46 marathons at Napa Valley and Twin Cities, qualifying her for her 4th consecutive Olympic Trials marathon this coming January in Houston.  A few months later she finished second “in the closest vote in the 30-year history of the award.”  That would be the 2010 UltraRunning Magazine North American ultramarathoners of the year, where she received two fewer votes than Tracy Garneau.

While I was personally bummed she didn’t win the award because I thought that would be her last chance to win it, she just shrugged it off.  “I’ll just have to win it next year,” she ebulliently said to me.  Now, I’m a very optimistic person and a firm believer that if you set your mind to something you can do amazing things.  But, I’m also a realist and I knew how hard she had trained and how everything went perfect for her in 2010.  A year of training and racing like she had last year at 49 just didn’t seem possible a year later at 50. 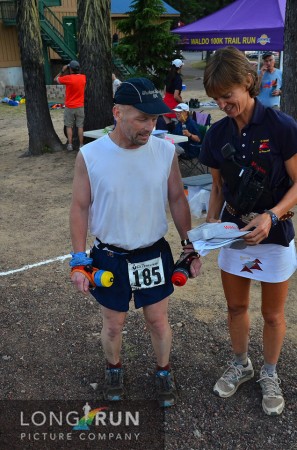 She also ran three marathons, won the Montrail Ultra Cup for the second consecutive year, and was recently awarded the USATF Ruth Anderson Ultrarunner of the Year.  Still not impressed?  Her 18:50 at Western States shattered the women’s 50 year old record by over three hours and was only seven minutes shy of Doug Latimer’s men’s record from 1988!  And her 7:51 is a world record for 50 year old women. 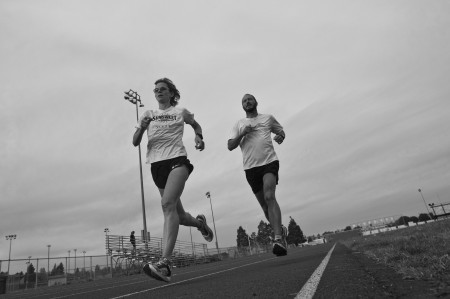 Meghan and I working out on the track. Photo by LongRun Picture Co.

But Meghan is not just a fast amazing “freak” at 50 years old. She’s also a giver. And a very pleasant one at that.  She is the Assistant RD of Waldo 100K, enforcing cut-offs and handing out finisher hats this year in a Moeben skirt.  She worked at Pine To Palm as a ham radio operator (KF7IMI) at an aid station and later at the finish line from 2am to 6am.  She volunteered at several other races and even paced me at American River 50 (yeah, TJ, I had a pacer for a 50 miler and she wears a skirt).  She also was a regular training partner all year long.  We obviously defer to her majesty when it comes to the specific workouts and pace, but she has a concern and awareness of and really does care about everybody else in the group.

Meghan is the most amazing female ultrarunner in 2011.  I don’t care what happens with the UROY voting.