The Route: Robie to the River and Back

The Eugene crew took on a Training Camp classic, today. Robie to the River and Back covers some crucial Western States Trail and finishes on the track. Nothing can equal race day, but this run provides a simulated end-of-race experience and the more you put into it, the more you’ll get out of it. After yet another late start (11:30 a.m.), the group met up with Kim Barger (wife of Dan Barger) for the easy trip to the shortcut trail. Kim continued on the course proper while the group took the shortcut trail, mostly to show Dan-O how to save a few minutes on race day. 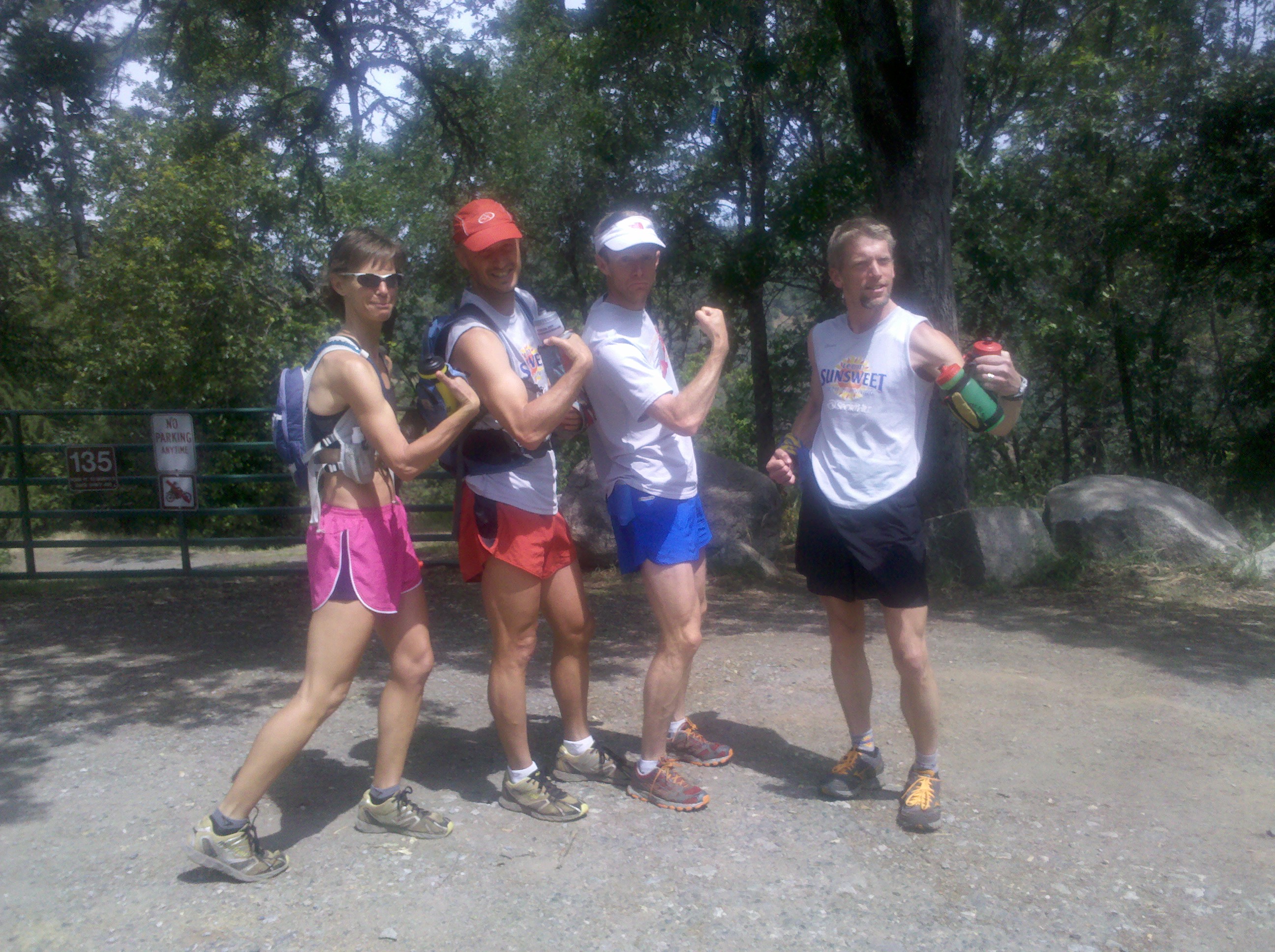 Can we get a lens cloth over here?

The pale Oregon runners then crossed Hwy 49 at the upper quarry and then followed the Quarry Road to Ball Bearing.  At ALT, Laurie was nice enough to show up with aid for the group. From there, the crew ran the course proper to the river. 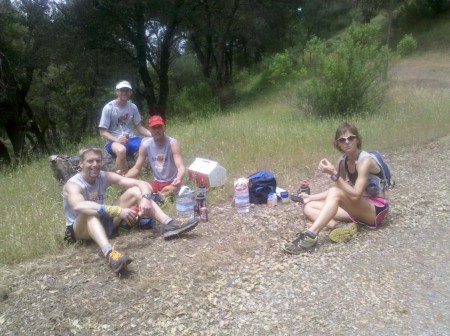 This one looks a little greasy, too. And why is Thornley doing yoga in the grass? 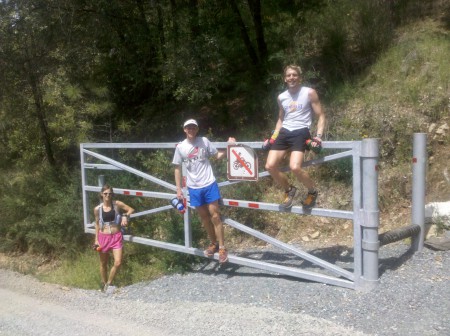 I mean, it's like you smeared sunscreen or Body Glide or something on the lens.

Meghan reports: “(It) was good. We kept Dan-O in the back of the train and I was often leading to keep everyone in control. Unless it was that they liked chasing my pink shorts.”

The group had been talking about the infamous 250 meter finish on the track all the way up from No Hands, and GM decided to run the kick out of the boys by pushing the pace on the road, accelerating over the white bridge and screaming onto the track.  She entered the oval ahead of LB and Dan-O by about 10 meters and was feeling confident she could hold everyone off. But, it was not to be.

“I knew my leg speed is light years ahead of hers,” Thornley said, recalling how he courageously beat up on the only woman in the group. “Dan-O went around her with ease on the backstretch and she looked back to see me accelerate past her.”

Bili came in a minute or two later and the group retired to the Auburn Ale House to celebrate themselves. There, they met up with special guests AJW and Todd “Brewhaha” Braje who will be staying with the Eugene crew until Thursday. Meghan ruled it a Shanghai Stout worthy run (plus a burger and sweet potato fries). Dan-O downed a pint of Imperial IPA in lc’s honor.

Quote of the day: “Laurie is certain that no one has ever worn Hawaiian shorts with a hoodie.”

The Route: Hardesty summit and back, then Goodman Creek Road to Lost Creek Trail to Mt. June to Sawtooth to Hardesty.

When Tommy first agreed to run with me on Robie to the River day, the plan was for him to go 12 miles. I talked him into 18, but that was before we got lost trying to find Lost Creek Trail. 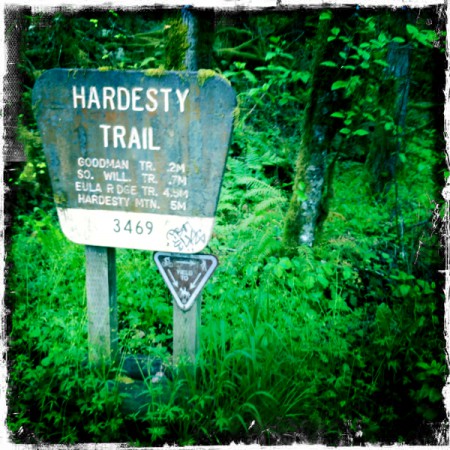 Now this is what a clean camera lens looks like.

I ran up to Hardesty by myself, listening to Friday’s edition of The New York Times on Audible.com (nothing like three-day-old news to fortify the runner’s soul). I met up with T-Bag at our dueling Dicks in the Box, and found him munching on a tub of peanut butter filled pretzels from Costco. That reminds me of a joke: “If two Honda Elements collide, do they make a compound?”

TA and I made the climb up Goodman Creek, meeting up with the Lost Creek Trail and picking our way up toward Mt. June. 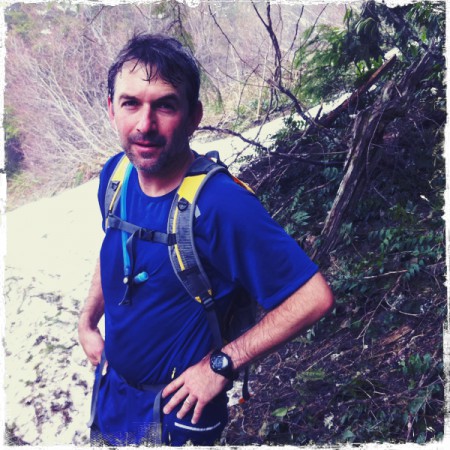 Tommy, pissed that he just climbed a non-compulsory out-and-back.

We missed the turn to the second half of the Lost Creek Trail (my penance for laughing at Bili getting lost on Friday) and Tommy was nice enough to try to take some of the blame. But I was leading this turd hunt and we both knew it. The worst part was that this wasn’t the first time I had made this wrong turn. As we rolled around a route that seemed to corkscrew endlessly up Mt. June without ever arriving anywhere, we did our best not to complain. After helping a group of lost hikers get even more lost, we located the trailhead to Mt. June and tried to keep our spirits up. 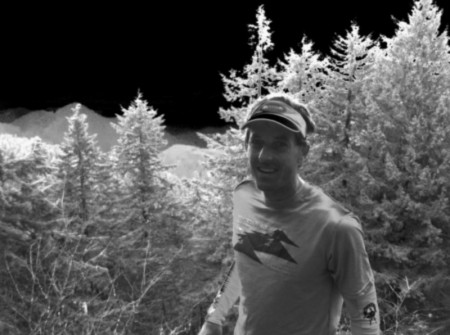 lc, in the spirit world after 30-plus miles.

On Mt. June we found snow and fog and 38 degree temps and moss and downed branches and we both remarked how similar the experience was to the closing 28 miles of the WS Trail. We slogged across the ridge to Hardesty, did the descent back to the car and reunited with Tommy’s tub of pretzels. He also had a case of Stellas in the back of his DIB, but we were so wiped we didn’t even bother. Tommy gorged himself on deviled eggs at the Chevron station (his new favorite race food) and I inhaled two slices of Schmo2 and 32 fat grams of chocolate. Later I made brownies, just like we do at camp.

Tomorrow: Variety pack of different runs, as the group breaks up into small groups to crew for AJW, Brewhaha and Graham Cooper. 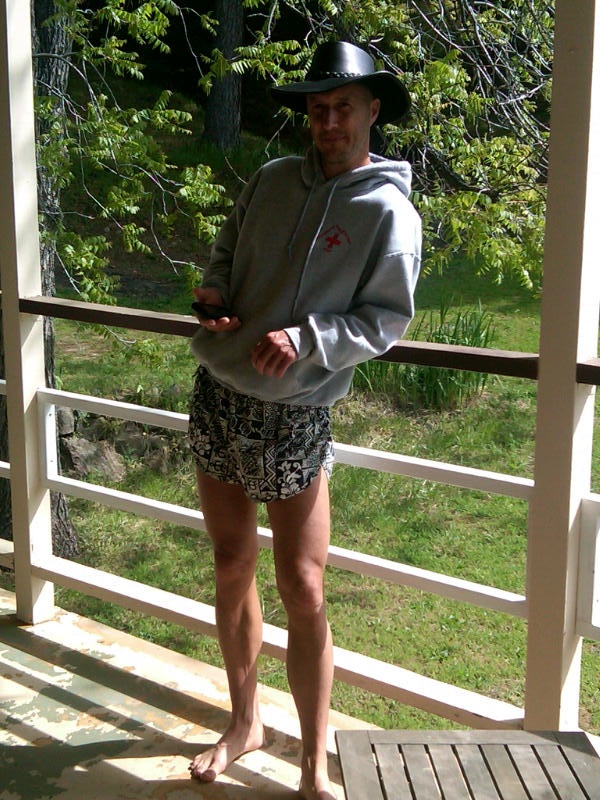 Just when you thought it couldn't get any worse.