Hi. lc, here. I’ll be conducting the juices in Thornley’s absence for the next seven days. In case you haven’t heard, LB, Bili, TW, MB, GM, SLF, et. al., have headed off to the annual Michigan Bluff Training Camp. I’ve been to this camp before. It’s a blast. Basically, you spend your days running on the Western States course, eating, drinking and watching WS videos. Then you sleep in and do it all over again. Rough life! I wish I could go, but unlike Thornley, I’ve got a life outside of running.

While the boys* are off running the canyons, Cal Street, the Thumb and all the other WS greatest hits, I’ll be here in the Yooj taking my kid to school in the baby jogger, pounding out the miles on the Ruth Bascom Riverbank Bike Path and living vicariously through those guys. 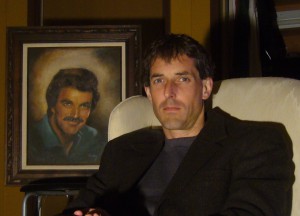 I’ll be taking reports from the field and ghost writing a collective training log for the OR crew. I’ll also be conducting a juicy experiment of my own as I attempt to simulate the MB Training Camp here in Eugene, a city a certain barefooted one concluded was a crappy place to be trail runner. I disagree, but what do I know? My goal will be to capture some of the spirit of camp without actually being there. Hopefully I can inspire myself to run a little bit harder this week by deluding myself into believing I’m right there in Michigan Bluff.

*Even though GM is most definitely not a dude, Thornley assures me I can refer to her as just one of the guys during training camp. Laurie Thornley, aka “The Queen,” is currently the sole female and the only smart one in this confederacy of dunces.

This might be the only day that I manage to run more miles than the boys. While they’re planning a 6-miler from Foresthill to Michigan Bluff, I’ll be sweeping the first 55k of the Capital Peak 50 Miler in Olympia, Wash. Since I can’t replicate their runs on a daily basis this weekend, my goal will be to equal their two-day mileage total. Today, at least, I kick their asses.

What They Ran: A few camps ago, Bili and LB decided to make grand arrival in Michigan Bluff by running there. Sure, it’s a bit pretentious to come gallivanting into town like you’re, well, Lord Balls, but it’s also Hella-fun to get out the car, strap the shoes on and run right into Volcano Canyon. Along the way, you get to see Jurek’s dead dog, Chez Trason-Anderson and the location of the old MB whorehouse.

What I Ran: Up, down, side to side, big up, big down in Capital Forest near Olympia, Wash., at a blistering 20-minute pace. 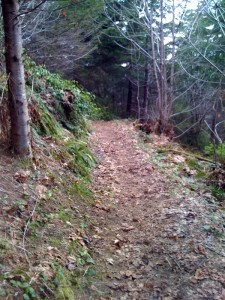 And miles to sweep before I sleep.

I swept the Capital Peak course for RD John Pearch and got some good time on my feet thanks to two older dudes who had tons of spirit and not much leg speed. I came through the 19-mile point in just under 6 hours.

What they saw: Horses.

What I saw: Lots of orange ribbons.

Camp Conditions: LB said he felt pretty crappy running after all that time in the car. Reports were that GM was strong. Bili, who arrived a day early, ran out to meet them halfway. The temps were in the 50s with reports of snow on the course, earlier in the week. On the menu for dinner was spaghetti with salad. Bili’s brownies earned high marks.

“They were sweet and chewy,” Thornley said. “They were probably about the seventh best brownies I’ve had in my life.”

The boys have a training camp classic planned for today: Robie to the River and back to the finish. It’s 38 miles of pure WS Love and a great way to put you in the spirit of camp. 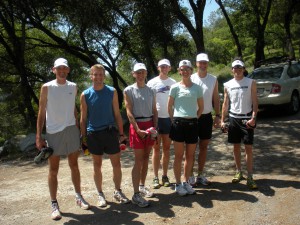 I’m going to try to replicate it as closest I can in the Yooj with about an hour to do it.

What They Ran: Meandering trail through some of the most crucial miles of the WSER. Even though “out” section of this run follows the course backwards, by the time you get to the “back” you’re starting to feel all beat down and Western States-ey. A great race simulator with epic aid stations staffed by the womenfolk/nappyheads/Queen. The tradition of taking the Way Too Cool 2008 shortcut route on the “out” continues.

What I Ran: Spring Boulevard to the Willamette River and back to the South Eugene High School Track. Okay, so this was a pretty lame attempt at a simulation, but Spring has that sleazy teen make-out spot feel that Robie does and running around Capital Drive to Hendricks Park feels a lot like the streets of Auburn at the end of WS. Finishing at S. Eugene High was a no-brainer. 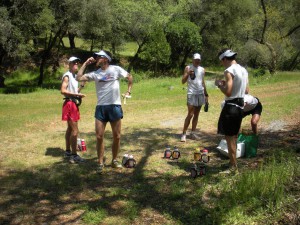 A new tradition for '09: The ALT Circle Jerk

What they saw: Wild turkeys, Jon Olsen and a yo-yo smuggler with a French bulldog who was hot for Monkey Boy’s visor-wearing business.

Camp Conditions: Rob Cain, aka SLF/Perma Premie, “daddied it up” and ran great (sub-18-hour) splits all the way to the finish. A goal for this year’s camp will be to put some weight on SLF, who is still recovering from double-hernia surgery with a chaser of Rogue River Giardia. The Queen brought much-appreciated Dibs ice cream treats to the Hwy. 49 aid station, Dan-O ran a 6:30 mile @ the track to impress the ladies and round out a 100-mile week and Pete’s Diner was the post-run venue. 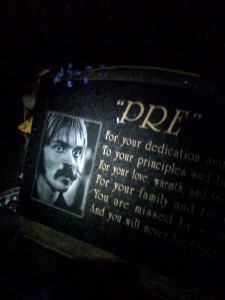 On the camp schedule for tomorrow: 12 miles easy peasy.