I really enjoy race directing.   I think as much as running Western States.  Maybe as much as training for Western States.   More than losing a $1000 bet.   Definitely more than lying (or was that laying?) on a cot at mile 93 at Western States.   I’m in my ninth year co-race directing Where’s Waldo 100km (maybe soon to be just “Waldo”) with Curt Ringstad.  We only register about 150 runners and organize a similar number of volunteers.  Pretty small race in terms of numbers, but complicated enough for an all volunteer race “staff” with three remote aid stations that we can’t drive to.  Race “work” starts to get pretty busy for me after Western States (this year not until after the Cascade Cream Puff).  I often get asked how many more years I’ll continue doing this.  Sure, there are many times I think it would nice to be able to play in the mountains again in the summer like I used to do 10 years ago, without any commitments, but I just don’t think I’m quite ready to give up the gig anytime soon.  So what is involved that keeps me motivated and excited to come back?  Lots of things.  We’ve got the course to prepare; sponsorship to manage; shirts, hats and other stuff with logos; communication, medical, and search and rescue; and then the biggies runners and volunteers, without which we wouldn’t have a race.  There are a myriad of other details, too, along with race day itself (which I may post about later) but those are the main things. 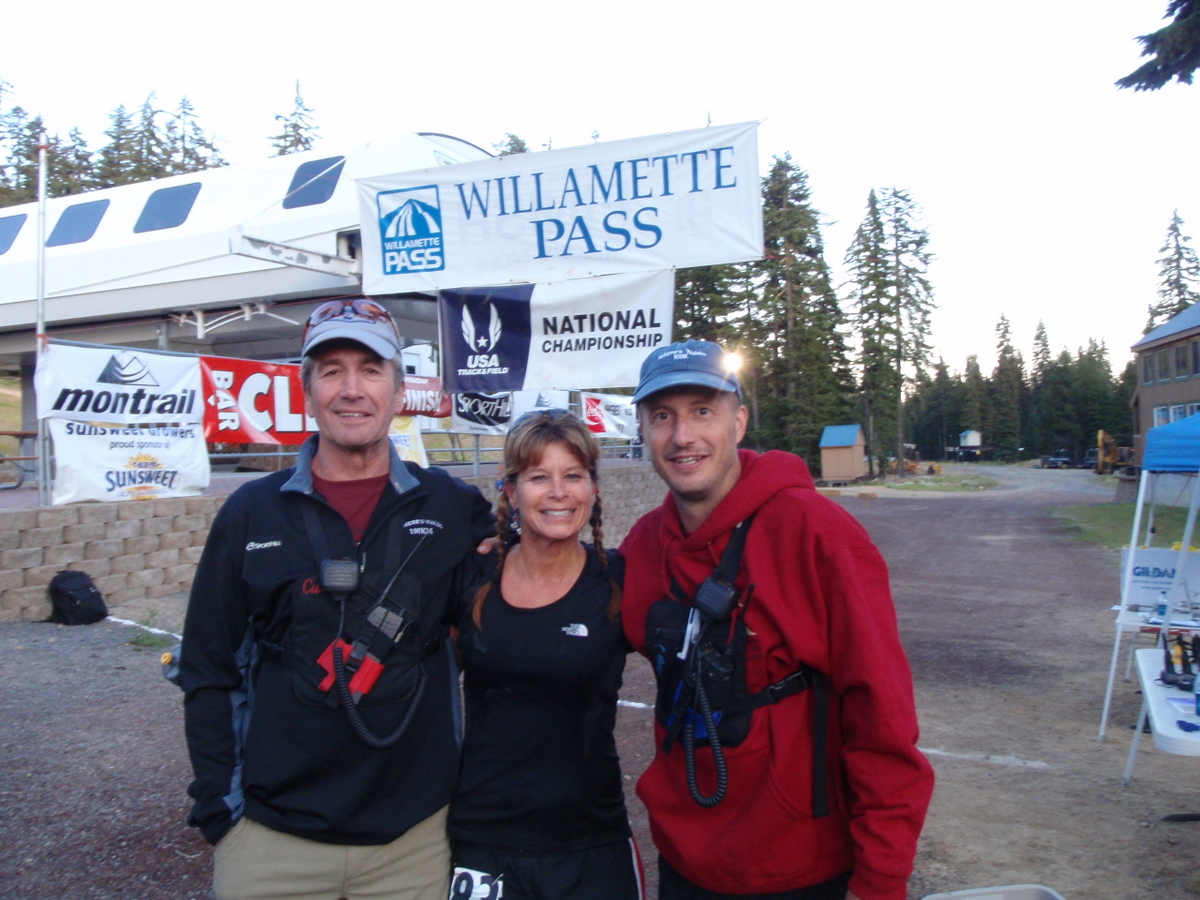 Curt and Craig with one of our favorite runners Pam Everett

First, we do trail work.  This has been a passion of mine since before we created the Waldo course. The first year of Waldo (2002) was a challenging year and is really where we established a relationship with the Forest Service.  Curt designed an awesome course that was almost all single-track that connected three big peaks, but it included trails that hadn’t been used or maintained in years.  They existed on some maps, but in the field was unknown.  We were allowed to use them but warned that we would have to find and then maintain them.  We weren’t certified to use any chain or buck saws that year so we just used muscles.  Lots of muscles.  We did a surprising amount of work that year and opened two trails that had been abandoned for decades.  Most people appreciated us, except for the deer hunters whose opening day was the same as our race day that year (September 28, 2002).  My wife convinced me that giving an award to the first person to finish the race wearing antlers was not a good idea (thanks, honey). 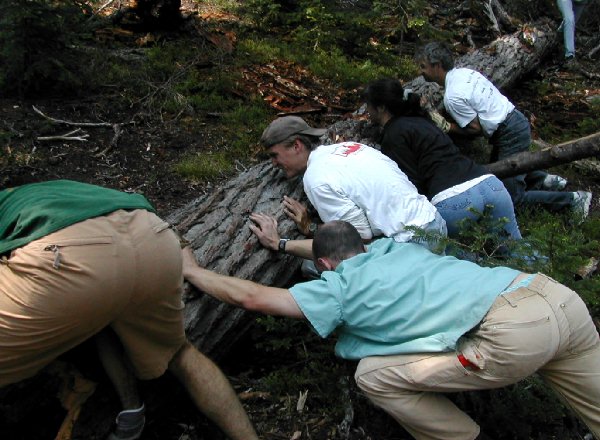 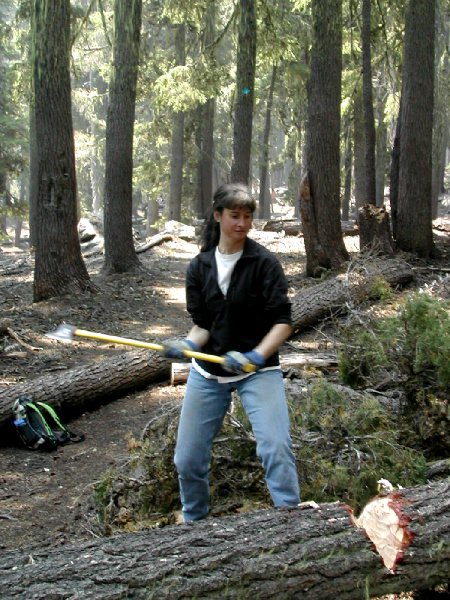 Fast forward to today.  We now have an annual trail work weekend in July where we do three days of work with three certified sawyers (Curt, myself, and Kelly Woodke).  We had over a dozen people help this year which made it a breeze.  Oh, and I didn’t sign a single volunteer requirement form so these were real volunteers! 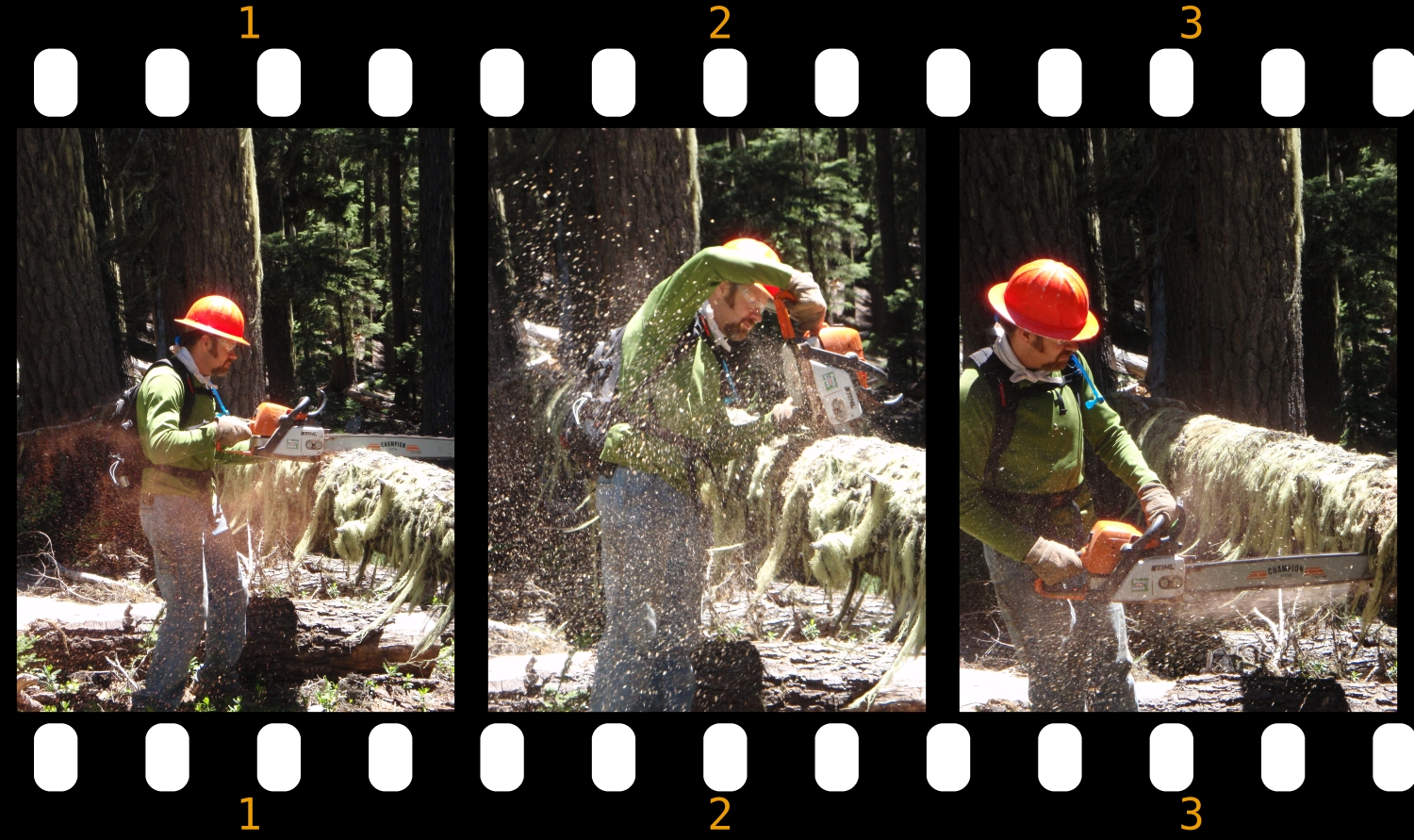 Kelly Woodke, Race Expert Logger (chaps are under his pants) 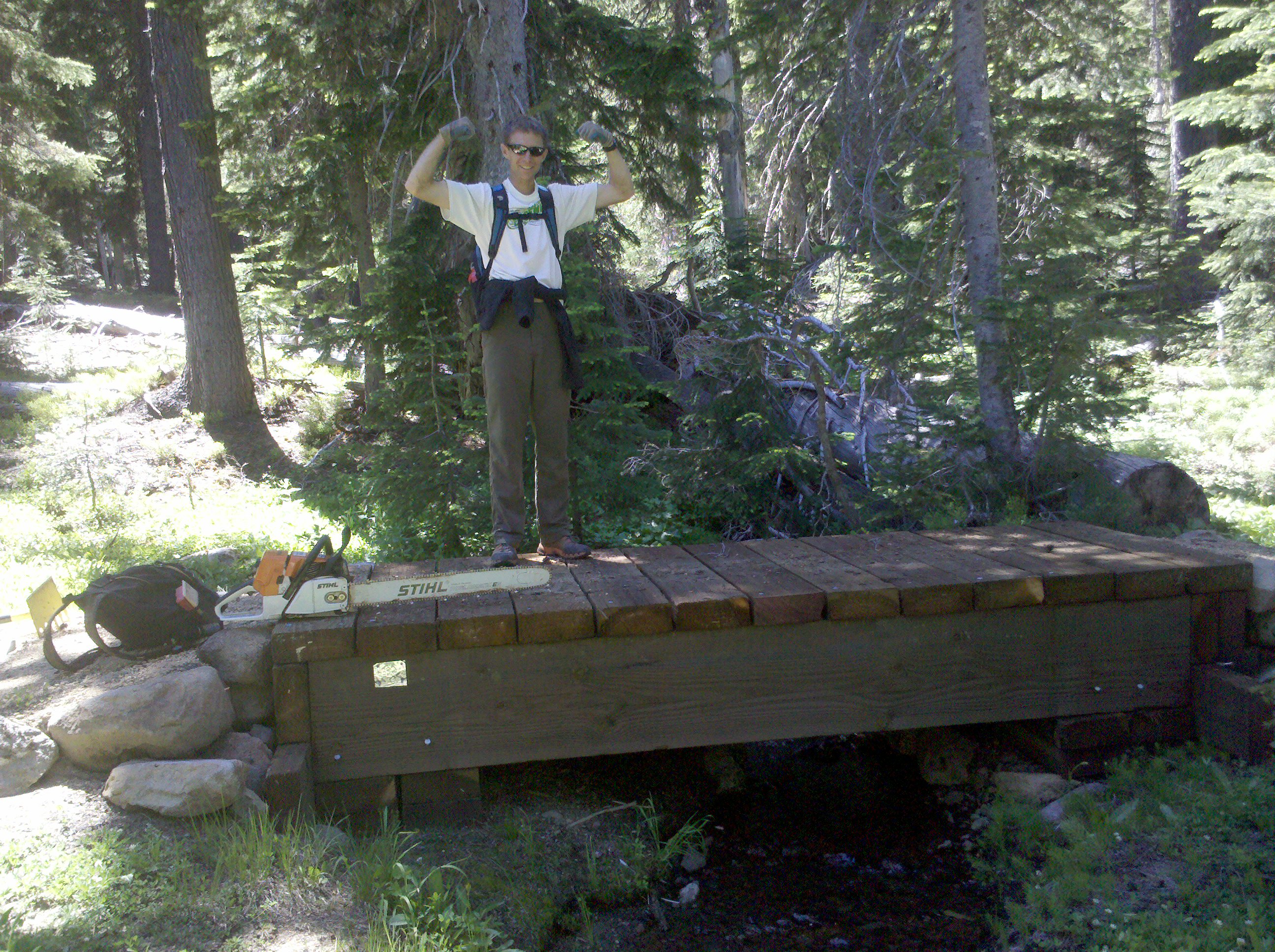 In addition to maintaining about 40+ miles of the course, I’ve also become a Pacific Crest Trail steward and am responsible for a 9.3 mile section of the PCT in the Three Sisters Wilderness.  This is outside of the race and because it is wilderness we have to use cross cut saws, a.k.a. misery whip.   Why would I do this?  After the course sabotage during the 2007 race (good thing I didn’t have a blog back then or you would have seen me rant, big-time), it was suggested by my friend and co-RD of SOB 50K, Rob Cain, that we adopt a section and gain some credibility with the thru-hikers.  The hope was that we’d get the 18 miles of the PCT we use in the race, but those are coveted sections by PCT stewards and I have to put in my time with the mosquitoes first.  It’s fun doing a remote wilderness section but it would make more sense to have the 18 miles of the PCT that we use for the race.  Regardless, the trail work is very satisfying and it provides opportunities for many runners to make contributions by working on trails we all use. 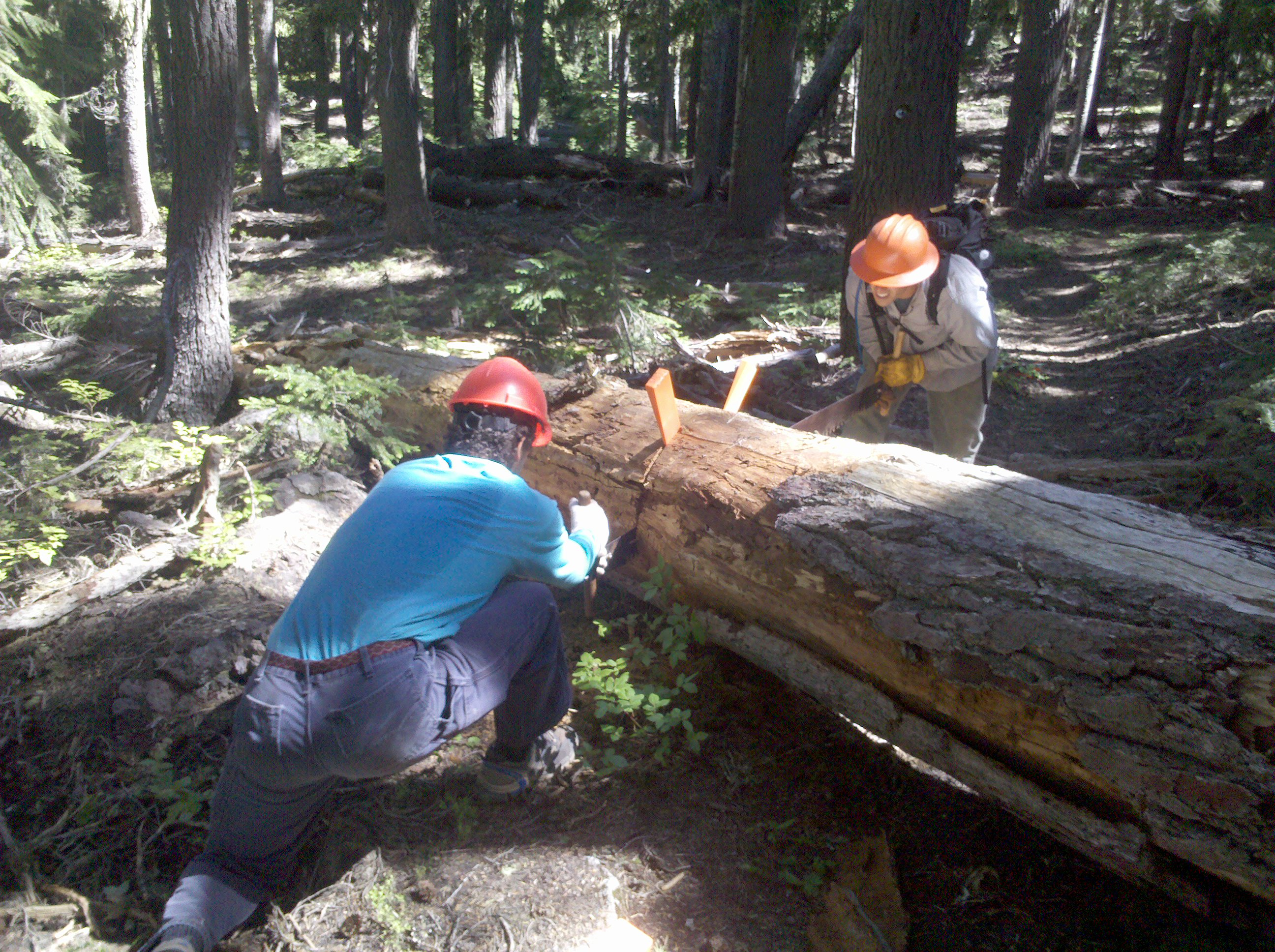 Jai and Caleb Ralls on the PCT with the misery whip

Sponsors.  Another fun aspect of race directing is dealing with the sponsors.  Because I know how hard we work, I’ve never been shy about asking people or companies for help.  I know of some race directors who are hesitant to ask and they end up missing out on all kinds of support.  If you have a good event and you work hard, companies and individuals want to support it.  And there are all kinds of grant programs to get cash for events from cities, counties, etc.  It’s fun to discover these and tap into them.  This isn’t an ad so I’m not going to list all our sponsors here, but you can check out the Waldo sponsors page if you want.  Because of many generous sponsors we’ve been able to keep the price of entry at a paltry $90 and still have contributed over $31,000 to the Willamette Pass Ski Patrol.

Shirt, hats, and things with logos.  Working with our graphics guy, the screen printer, our shirt and hat provider, figuring out the sizes and types, etc.  Always fun dealing with new stuff.  And, for some reason, I actually like it when it gets close to deadlines and we’re scrambling to get stuff done in time for the race. 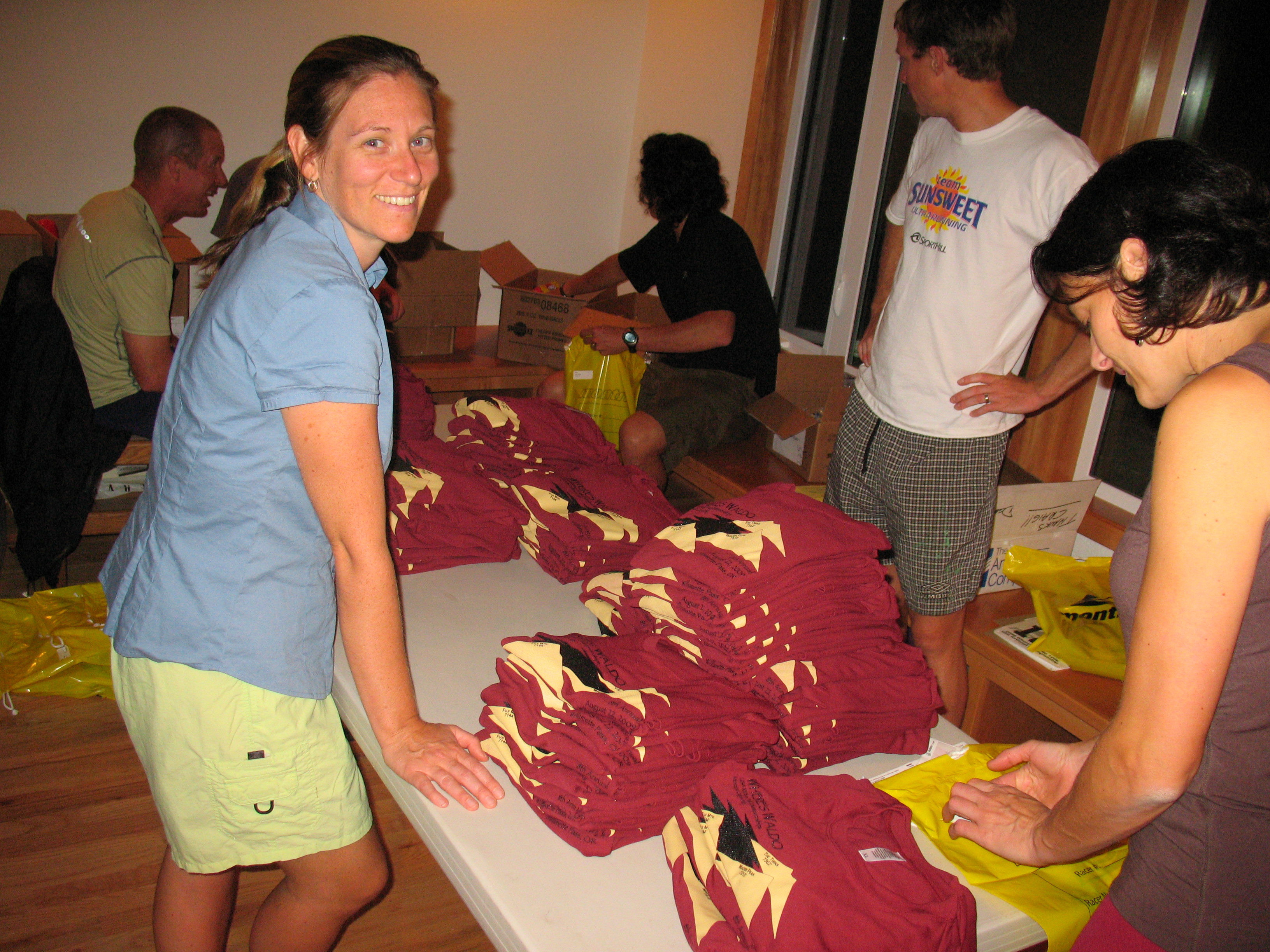 Communication, medical, and search and rescue.  These aspects of race directing are just an extension of the Willamette Pass Ski Patrol.  The patrol is the beneficiary of the proceeds and they (we) have been very into the race since the first year.  About 50 patrollers are at the race providing aid station, medical, and SAR support.  Using our radios and repeaters, starting IVs, searching for lost runners in the middle of the night – it’s all good practice for us.  And, as is the protocol while patrolling, we don’t take our shoes off until the last runner is in.  Some years this isn’t until 3:30am!  We also work with some very enthusiastic ham radio operator groups.  They track every runner through every aid station, and while they are providing us a valuable service, they are grateful for the opportunity to practice their skills.  And thanks to Matt Dillon, the leader of the hams, several of us patrollers are now licensed ham operators. 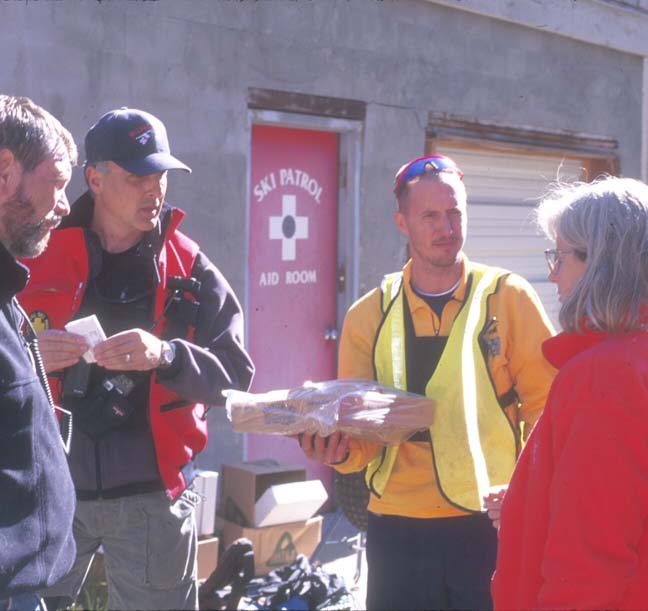 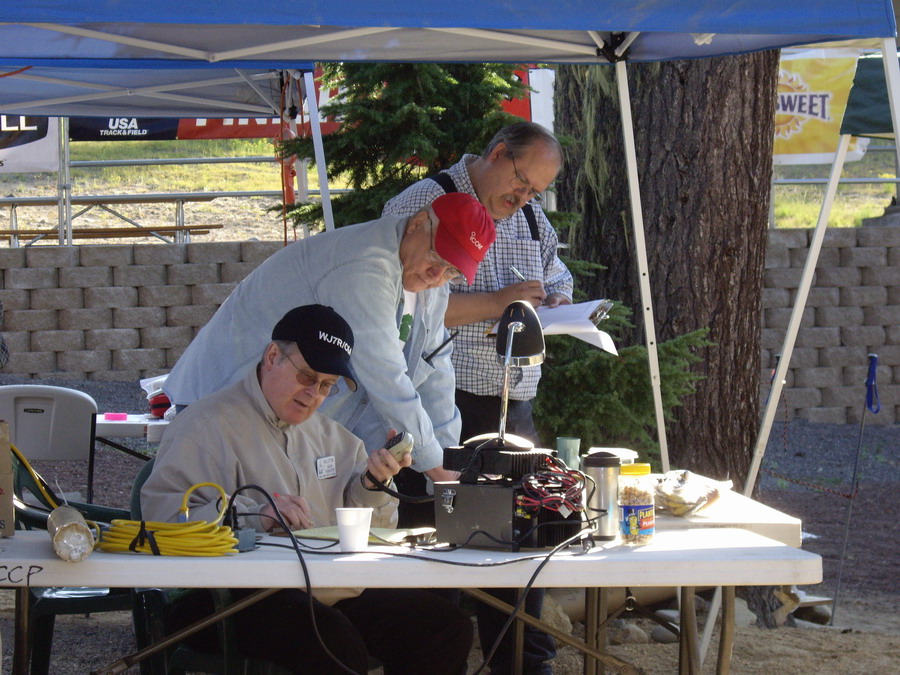 Ham radio operators at base

The volunteers.  I love organizing and interacting with people.  We have over 150 volunteers helping at the race from several different groups including the patrol and ham radio operators.  When I first got into this sport over 12 years ago, I went to a couple of Norm Klein races.  Norm, who was the race director for Western States for 14 years in addition to several other races over the years, used to get real emotional when talking about his volunteers.  At the time I thought he was being melodramatic.   Like he got it mixed up and thought we have races so volunteers had something to do.  But, I think understand now a little where he was coming from.  It is amazing to see volunteers come back year after year after year to, whether they are runners themselves or not, help make the race a success.  Our race even has three aid stations that are 1.5, 2.5, and 3 mile hikes in.  No access by car.  How could we ever get people willing to work at those stations?  It has not been a problem. We’ve got many folks who have been with us every single race.  It does humble me.  I think I get it, Norm. 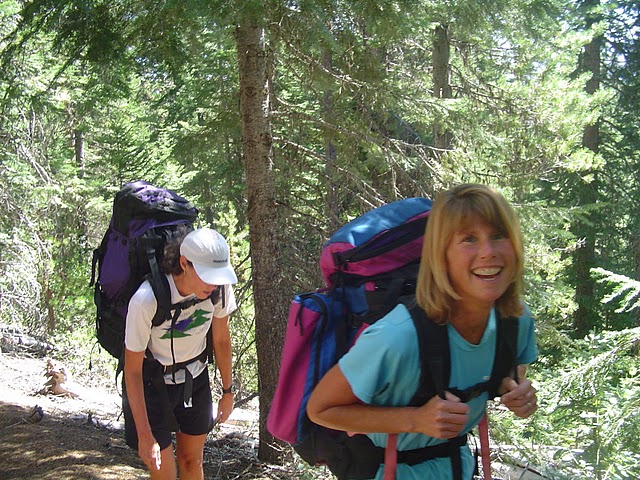 Finally, I enjoy the runners.  What an incredible community we are part of.  I’ve met a lot of good people in my 14 years of running ultras.  A couple not so good ones, but they are the rare exception.  I like looking up people’s results and hopefully knowing something about every runner in the race.  We’re small enough that is almost possible.  Often I know about someone but can’t put a face to their name.  I like watching people trying hard and succeeding.  Perhaps I’m a bit sadistic, but I like hearing people tell me they cursed my name as they went up Maiden Peak.  Yeah, it’s hard.  But that’s what you came for, and you like it too. 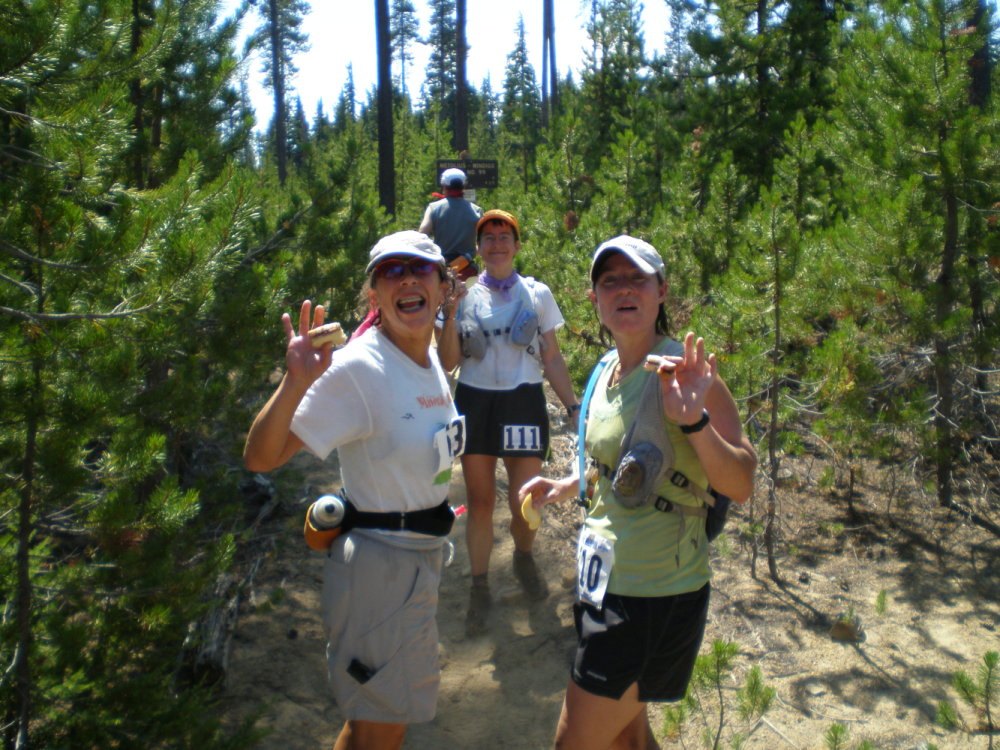 Well, it’s July 29 and there are only two spots left for this year’s race.  If you want to run, you’re probably too late for this year.  But you can still volunteer.  Shoot me an email.