The objective: Log 9.3 miles of the Pacific Crest Trail in the Three Sisters Wilderness Area and hike back to the starting point in one long day.

The players: Jai Ralls, 34 year old, works in construction, three 100s under his belt; Derek Snelling, 39 year old lawyer, attempted first 100 at WS this year, doesn’t know what he’s getting into; Me, uhh, 45 year old computer nerd who doesn’t know what too much is. 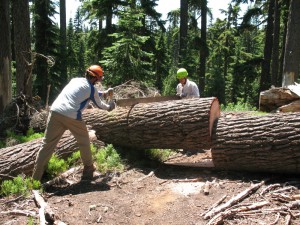 The tools: A seven-foot cross-cut saw (a.k.a. misery whip), a single-bit axe, a polaski, wedges, DEET.

The why: Somebody thought it would be a good idea if Where’s Waldo adopted a section of the PCT.  I think it was Rob Cain (SLF) back in 2007 who initially brought the idea up.   The Pacific Crest Trail Association is responsible for the whole PCT and assigns stewards for each section, and in mid-Oregon those average about 7 miles each.  When I was interviewed this spring I told them my preference would be some of the 18 miles the trail uses in the race.  However, because those sections are coveted (i.e. easy access and outside of wilderness area) we got assigned a remote 9 mile section in the Three Sisters Wilderness. 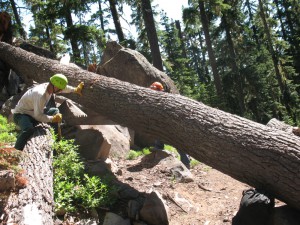 Jai and I starting an undercut

The time: 18 hours on the trail.  With 2 hours travel each direction, my total was 20 hours and Derek and Jai drove home at 1am for a total of 22 hours each. 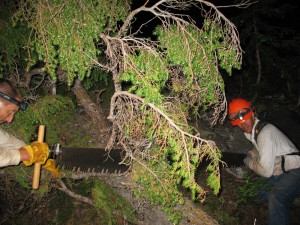 The encore: The next day, Jeff Riley joined me to repair the damaged tread on the Mt Ray trail which is part of the Where’s Waldo 100km course. 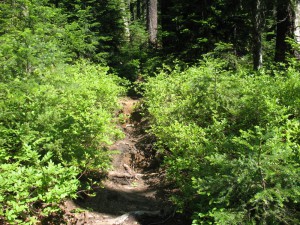 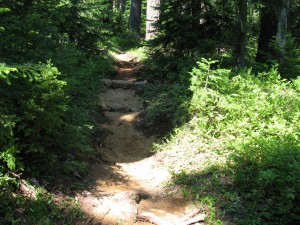 The lesson: Never ever complain about how heavy my chainsaw is.