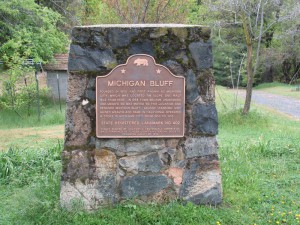 Here are the answers to the Michigan Bluff Trivia Contest.  Not sure of the exact score but I’m going to give shirts to Paul Charteris and Anthony Brantley.  Carol without an E also did very well, but she already has a shirt and I got most of these answers from materials that were in her house!  Gentlemen, please leave me your size requests.  Perhaps I can get them to you this weekend.

1. What was the original name of Michigan Bluff?

The original name of the town was Michigan City and it was founded in 1850.

2. When and why was the town moved to it’s current location?

In 1857 the town was moved just up the hill to its current location because the town was sliding away due to undermining.  There was also a big fire in 1857 that sealed the deal.

3. How many cemeteries are there in town?

Three.  There are two big ones: the Masonic which is on the south side of the paved road and the Odd Fellows on the north side of the road.  There is also an area just below (south of) the Masonic where the Chinese were buried.  Not much left as evidence here but you can still see the indentations of the graves.  I’ve also heard of another area near the Masonic called the overflow but it looks to me to be part of the Masonic. 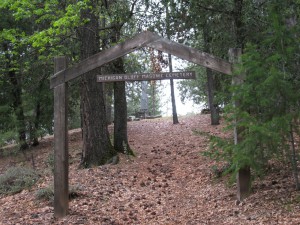 4. In the early years you could buy pukes & physics.  What are they?

5. What’s the name of the dirt road you run on as you enter the town in the WSER?

6. What’s the name of the dirt road you run on as you leave the pavement of town in the WSER?

Gorman Ranch Rd.  If you continued on this road for about 7 miles you hit Mosquito Ridge Rd.  During the race we turn right on Chicken Hawk Rd before hitting the single track leading down to Volcano Canyon.

Not very many.  Somewhere around 30, maybe less, maybe more. 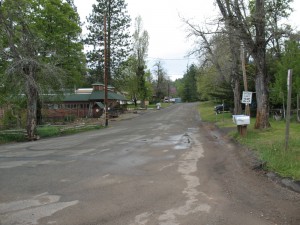 9. Aside from gold, what other mineral was mined at Michigan Bluff?

Next to gold it was silica, also called quartz.

10. What founder of a major California University purportedly made his start here?  And what years did he live there?

Leland Stanford operated a store here from 1853-1855 or 56.  Apparently there is some dispute as to whether he actually lived in town or not.

Bonus:  Aside from minerals, what else was mined at Michigan Bluff?

The brothel in town mined miners.  Michigan Bluff was the big city for those miners working at Last Chance, Deadwood, ElDorado, etc.