With all these changes to the Western States course because of record snowfall (or lack of snowmelt) announced today – no Lyon Ridge, Red Star Ridge, Robinson Flat; no crew access until 55 miles at Michigan Bluff; only two crew members at each shuttle aid station after that – I can understand how runners and crew might be disappointed. I will admit that I was at first disappointed that the Placer County road crews couldn’t get the road to Robinson Flat plowed in time for us. Disappointed that we don’t get to run across the snow on Red Star Ridge. Disappointed that we don’t get to cross Duncan Creek. Disappointed that my crew is going to have to split up and not experience as much of my race as they could have. Easy to understand how others would feel the same. But, as I’ve had a few hours to absorb the changes and think about the implications to my own plans, I’m very excited. Why wouldn’t I? I am running my 8th Western States 100 in five days! I’ve always maintained that one of the best tools you can bring to Western States is problem solving. Well, this is our first test: use drop bags, wear a hydration pack early, split the crew up, etc.

I have been asked many times over the years why I care so much about this race. Why I am so obsessed with Western States. No denying there are many 100 milers in this country now and many are in incredible mountain locations. I cannot dispute the fact that I have not run every 100 miler in this country. Sure, many probably are awesome. That’s great for our sport since so many people want to run 100 milers now. But I have little desire to run any other 100 milers. Go ahead, call me narrow-minded, rutted, and all kinds of other names. I am obsessed with this race and really don’t care what anybody else thinks. I’ve told this story many times but now seems like as good a time as ever to tell it again. My family moved from the Bay Area to Auburn Lake Trails in 1978. The move from the city to the rural foothills of the Sierras was awesome for me and my brother. We got to play in the American River, hike in the canyons and all the trails nearby, camp, shoot guns, collect snakes, get poison oak, etc. It was a life-changing move for me and I will forever be grateful to my mom and step-father who decided this would be a great place for us to live.

It was in June of 1978 that my bro and step-bro found ourselves camping on Hoboken Creek (you know, the first of two creeks you cross between Green Gate and ALT aid stations) which flows into American Canyon creek. Before it was dark, a filthy-looking skinny dude (can’t remember if he had a pacer) comes running by and asks us where the aid station is; we had no answer. What the heck was he talking about? After a couple more came by we eventually figured out that they were running 100 miles (well, really only 89 miles but close enough at the time) from Squaw Valley to Auburn. That was not a very restful night of sleep and the obsession was born. I was about to be a middle school runner at Georgetown and knew that I would do this run someday. Little did I know it would take until 2001 to finally run it myself. While I only ran track and cross country in high school at Golden Sierra, and then moved onto college in Oregon, I was fortunate to get to help a local WS runner Bruce VonBorstel (who introduced me to pork and beans) a couple of years, and work at Dusty Corners for a good number of years with my mom and brother under the captainship of Judy and Luke Rinehimer. Those days were fun. We didn’t know much, but since my brother and I were “runners,” we were often called upon to help runners with things like cramps, etc. 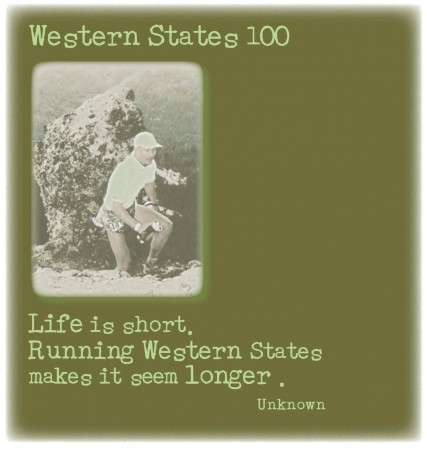 For those of you that will be there, I look forward to talking with you in Squaw Valley or on the course. For those that won’t be there, well, enjoy the webcast. It looks to be the best ever, thanks to many many volunteers.