You ever seen a bald Jizzle Wizzle?  Well, you’re going to on June 25 next year.   I imagine most readers of this blog think I only lose bets, and, well, I do lose a lot of bets.  But, today was match play at Hayward Field for one mile and I prevailed.  As a result, the Jiz will shave his head for the 2011 WS.

Unlike last year when we each ran our respective miles for time with pacers, this year we decided to race each other, and it actually turned out to be a fairly evenly matched race.  The Jiz definitely came fitter to Hayward Field this year than last year and looked sharp, too (Monkeyboy noted that his hair looked less untooked than last year).  In my attempt to channel Galen Rupp, I bought a 30 pack of Breathe Rite strips and shaved my face for the first time in a couple of months.  Even my mother-in-law said I looked a lot younger. 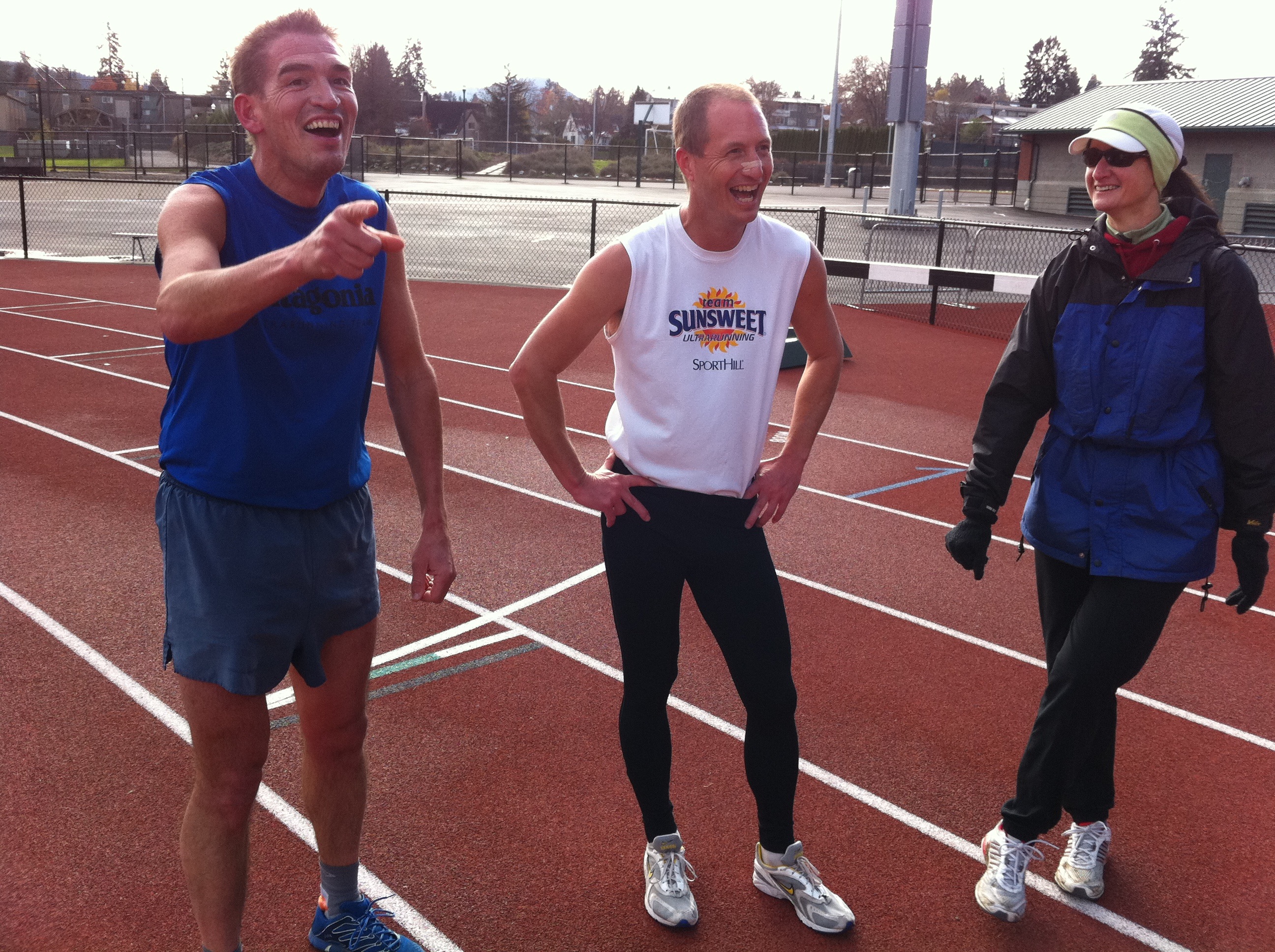 So how did the race play out?  You can watch Yassine Diboun’s video below, but I’ll recap.  There was less trash talk this year, perhaps because Monkeyboy wasn’t there to stir it up?  It was cold and we both knew we were about to hurt.  Ticer yelled go and I dropped behind the Jiz who took us out in 74-75 for the first 409 meters.  The second lap we slowed considerably and I almost kicked him a couple of times.  He must have been subconsciously saving for the third lap as we came through 809 meters in 2:33-2:34 but my plan was to stay behind him the first two laps no matter what the pace.  Breaking five was not going to happen and that was OK.  This was fun racing.  I eased around him on the first curve of the third lap and while I ran a 75, the Jiz hung on and we were together at 3:49 after 3 laps.   One lap to go and I thought I had it all wrapped up only to hear shouts from people that Andy was coming.  Meghan sternly said, “Craig, Andy’s really coming.”  Holy cow, Mr Wizzle was actually kicking hard. In typical Galen style, I looked back at the end.  I managed to hold him off down the stretch and we finished with times of 5:06.0 and 5:07.6.  Big 5-second PR for the Jiz.  Fun race.

After the race it was Rusty Nails, Sierra Nevada Pale Ales and, of course, Track Town Pizza.  What a great day.  Now if I could just beat him at WS…