I just received the latest issues of Trailrunner and Ultrarunning magazines, both of which referred to the debacle at Flagline 50K, and my thoughts turned to the subject of wrong turns. We’ve all taken them at one time or another — in training runs they open up new possibilities, but in organized group runs and races they’re a source of frustration. There’s probably not a trail ultra out there that hasn’t had someone cross the finish line and talk about the wrong turn they took. Over 50K/50M/100K/100M or whatever distance, something’s going to happen with a sign, a flag, a course monitor, or a runner who just happens to not see something at a critical moment. I’m guilty of spacing out myself, although it usually doesn’t take too long for me to figure out I’m not where I should be. Then again, I’m not usually in the lead. You backtrack, continue on, and if you lose a few places you take it in stride. In extreme cases, you keep going and going before you realize something’s wrong, and all of a sudden you’re miles from where you should be, foodless and waterless, worrying about whether you can get to the next aid station before it closes. 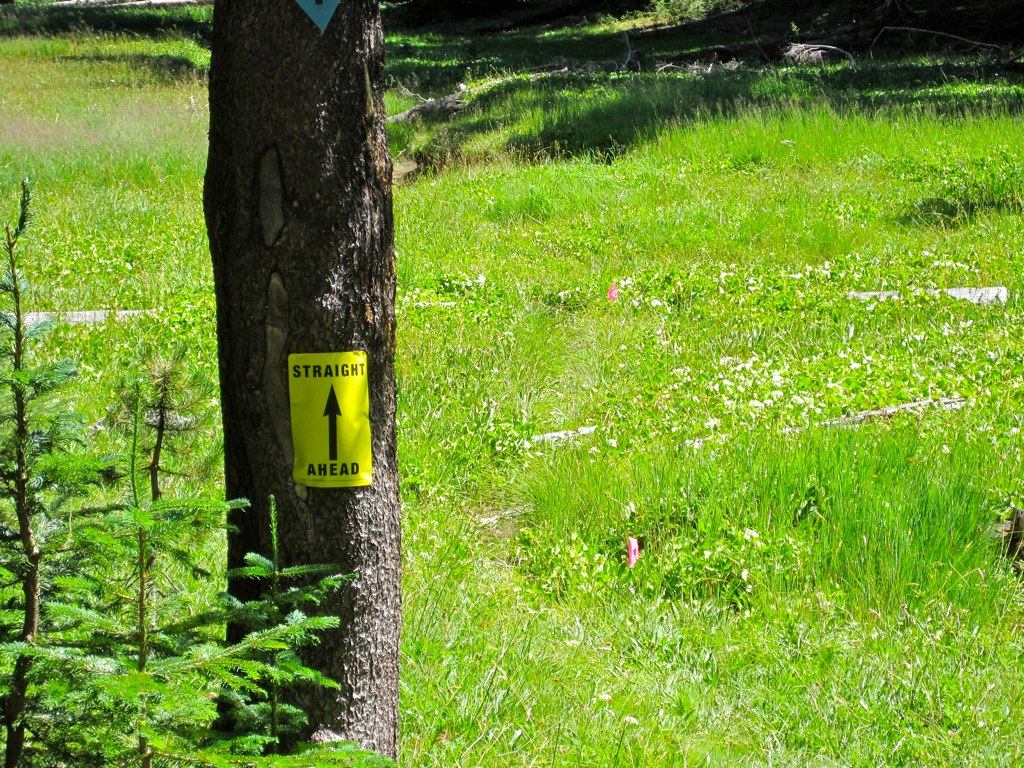 Where is the trail?

We could talk about that kind of stuff forever, but let’s look at it from the RD’s perspective. The RD starts the day ready for a great race where everything goes the way it should, and then all of a sudden there are reports of runners not showing up, coming from the wrong direction, and talk of course marking problems. What do you do? How do you balance correcting the mistake with the fairness associated in the final result? Or do we just look for a result that makes everyone happy? Now, I’m not trying to create any drama and say there’s an absolute right way or wrong way to handle things. So before I become the subject of everyone’s wrath, I’ll provide a personal example. Feel free to use it as a discussion point.

I’m the Co-RD (with my lovely wife, Bev) of a small race in NorCal called the Tehama Wildflowers 50K (April 23, 2011, in Red Bluff for those looking for a cheap, low key, early season, fast trail 50K). One year, the leader came into an aid station from the wrong direction, and the aid station captain corrected him and sent him on his way. I had enough time to catch him on a mountain bike with 5 miles to go, but I only had a rough idea of how far he had run. To be on the safe side, we agreed for him to run 2 quarter mile loops near the finish line to compensate for the wrong turn he had taken. After the 2 loops, he still won by about 20 minutes. Once the race was over, we measured the course and did some calculating. A purist might point out that the winner didn’t do the marked course, but my rebuttal would be that he raced a half mile more than everyone else.

But what happens when the race is closer? What would we have done if another runner had finished first while the guy who took the wrong turn was doing two unnecessarily long penalty loops? What if something similar had happened at a point in the race with no time to make a correction, or we found out after the fact? Do we let the result stand? I’m glad it didn’t come to making those types of decisions. It was stressful enough, and I’m just talking about a local 50K.

To raise the stakes a bit, consider the 2007 Where’s Waldo 100K. The race was in its first year as the U.S. Masters 100K Trail Championship and over $5,000 was on the line for the top 5 masters men and women. Early in the race the course markings were vandalized at four junctions along the course, sending runners in the wrong direction at 24 miles. Race staff had to scramble to figure out what happened and decide what to do. A promising day for some racers turned out to be less so by mile 25. In the end, most made it to the finish, some having done a bit more mileage than others. The early leader, Neil Olsen, ran 8-9 extra miles and made some people cry as he crossed the finish. He never said a bad word about what happened, but he did look pretty bad!

We found and corrected other instances of course vandalism that day, including one spot just 4 miles from the finish. What would the RDs have done about the finishing order if that had been where things went awry? If someone has a couple-minute lead at mile 24 that’s one thing, but it’s quite another when you have a couple minutes with 4 miles of downhill and a flat sprint to the finish, and visions of being the national champion. I suspect the ruling would have gone to the winners who were the first to cross the line having done the full course.

Which brings us to the Flagline 50K held recently in Bend, Oregon, the USATF 50K Trail Championship. You can read a synopsis of the race, and some lively back and forth commentary, at Scott Dunlap’s blog here. In this situation, the eventual winners ran a different (shortened?) version of the course after being misdirected due to either course vandalism or a mistake by a volunteer – it’s unclear which. Some runners may have backtracked to do the full correct course plus the additional mileage. The runners, USATF officials, and the race director somehow decided amongst themselves the order in which they would finish. Knowing some of the runners in question, there’s no doubt about their sportsmanship, and I know that some may have selflessly accepted a negotiated finish placing lower than they might have otherwise gotten. Others might argue that their placing would have been lower still if they had backtracked and done the correct course. And to paraphrase commentary in Scott’s blog, rules are rules and a race course is the course you’re supposed to race, thus, those lead runners that exhibited the incredible sportsmanship should have been disqualified.

So, aside from having dark fantasies about what we’d do if we caught a course vandal in the act (In mine I’d make them a permanent course marker with duct tape and Montrail flagging), what’s an RD to do? Are we hard-hearted, or are we flexible? How do we make the best of a situation gone awry? Is it fair to hold firm to the rules if a runner goes where the signs and flagging tell him or her to go? Does it matter if it is malicious vandalism or race management mistake? Does it matter if it is a USATF championship event where the rules are much more clearly defined?