Before Waldo 100K this year I was approached by a professional photographer who was interested in taking photos at the race.  This has happened about four times in the past ten years and once I describe how few people run the race and how difficult it is to get to the cool locations I either don’t hear back from them or they tell me they can’t do it.  So, when approached by Michael Lebowitz from the LongRun Picture Company this year I figured I would just make some pretty bold demands and scare him off quickly.  If the demands didn’t scare him off then the race and the runners might get something good.  When I replied with the following email I really expected a “No, sorry.  Can’t do it.”  This is what I wrote:

Thanks for your interest in Waldo, both as a photographer and runner. I would love to have you capture the emotions and challenges of the day. Completing Waldo is a big deal for many of our runners. Climbing Maiden Peak after running for 50 miles is, well, really hard. We have been contacted in previous years by other professional photographers but once they find out how remote the course is and that we are limited to 125 runners, they lose interest. There are some incredible places to photograph runners but they aren’t easy to get to and require driving, hiking or biking. We do have several amateurs that take pictures during the race and make them available to runners, so you’d have to offer a better or more unique product than what they offer.

2. Runners are able to download lo-res digital photos for free for use on their blogs, etc, with the option to purchase prints or higher-res. Your URL in the photo is fine.

3. Race can use a couple of high-res digital photos for submission to Ultrarunning Magazine and for our website or other promotional purposes.

We put this race on as volunteers with the proceeds going to the Willamette Pass Ski Patrol. Occasionally smaller gifts/donations are made to other supporting organizations/groups such as the backcountry patrol (Maiden Peak aid station), our ham radio groups, etc.

I hope you are still interested. Let me know your thoughts. 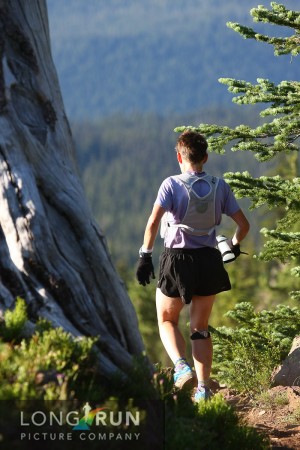 Almost immediately I get a reply back that he is very interested.  He isn’t so sure about the free, but “the difficulty and logistics make my mouth water, the relatively small field makes my ‘art antenna’ vibrate.”  OK, I think this guy just might get it.  While Waldo is a fund raiser for the ski patrol, it is much more than just a money-making business.  Like most ultras, it is a labor of love for almost all of us involved in putting it on.

So Michael came to the race with three other paid photographers and hiked into several remote spots to capture runners in places we’ve never seen them.  Michael has discovered that ultras are not like the typical 10K or road marathon that he normally shoots (and can actually make money at if the numbers are good).  He so smitten with ultras now that he is also going to shoot at the upcoming McKenzie River 50K and then is going to help us out at the Seattle Bar aid station at Pine To Palm 100 in a few weeks in Ashland – as an aid station volunteeer!  If you haven’t seen his gallery from Waldo, do check it out.  Click here. (password = waldo).  Absolutely beautiful and very creative pictures.  In addition to providing these digital images free to runners, he also enhanced (photoshopped?) 15 photos that we sent to UltraRunning Magazine so be sure to look for them in the October issue.  And, he created the following movie for us.  When you have 12 minutes, open this movie up to full screen, turn the volume up, and sit back and enjoy.

Here’s a little more about Michael Lebowitz in his own words….

I am a recovering addict, an out-of-shape long distance runner, an expatriate New Yorker, and a writer/photographer with an MA in political philosophy and a Ph.D. in wrong turns and bad choices. I decided one morning to lose 65 pounds of accumulated weight, sorrow, and damage, and to run a sixty-five mile event in my 65th year. It’s pretty damned symmetrical–and possibly delusional.

I’ve been running all of my life, one way or another, as often away from as toward the things that matter most to me. And except for the addiction, I wasn’t very good at it. Middle of the pack at best. But I always showed up, and that is what Running Before Daylight is all about. Suiting up and showing up.

I started writing seriously at sixty because it became clear that I was no longer willing to do things I was not very good at, despite the urging from others who thought I would be good at this or that. Since then, I have been published in various magazines including Newsweek and Marathon & Beyond and online at lifeasahuman.com (an award winning e-zine). I write about running under the heading of Tarmac Meditations, and I write about recovery. I teach neither, although I have taught film and screenwriting. I speak to groups about recovery and I am involved year round in training groups aimed at achieving marathon distance. I know I am a better writer than a runner, a better photographer than a run coach, and a better human when I’m clean rather than loaded. I am not an expert on writing, running, or photography, but I run long and I am a published photographer of runners and a professional race photographer. In ultra running terms, I am no elite runner but I get where i am going, do what needs to be done with the time allowed and i do it clean. It doesn’t get any better than that. 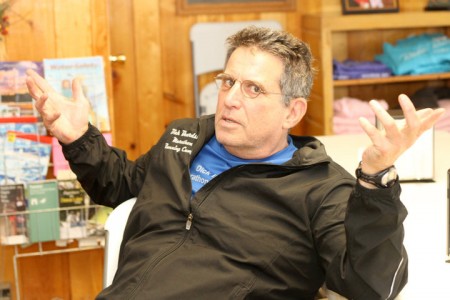 So if you see Michael at an ultra be sure to say hi to him.  Ask him about his running.  Now get out there and run, Michael.