How hard can riding 100 miles with upwards of 15,000 feet of climbing and descending on a mountain bike be?  I had volunteered at the Cascade Cream Puff a couple of years, and, while I had little experience on a mountain bike and didn’t even own one, I thought it looked like fun.  Real fun. The riders dealt with many of the same things we have to deal with while running: electrolytes, hydration, fueling, pacing, and just enduring many hours of discomfort.  I also thought that mountain biking would be a cool way to cross-train when I get injured, instead of going to the damn gym and using some boring machine inside while looking out a window.

So what the heck, I decided to sign up for the Cascade Cream Puff and ride it two weeks after running Western States.  When my friend and ultrarunning teammate Alan Abbs heard about my plan, he, being an experienced mountain bike racer and adventure racer, challenged me to what we coined the “Western Pickle Puff”  – combined time from both events – because we were at Mr Pickles Sandwich Shop when the bet was made.  Without flinching I said, “how about $1000?”  The reaction was priceless.  Alan is a successful government employee with two houses in two states and sky daddy knows how many bikes.  But, he’s also cheap. He’s the guy who was so impressed with Where’s Waldo the first time he and his wife Bev ran it, that he wrote a check to the ski patrol for $30.  A thirty friggin’ dollar donation?  Very generous, Alan. Thank you.

Just imagine the look on his face when I suggested $1000 for the Pickle Puff.  Now, I’m not rich by any means.  I’ve only worked full time for about 3 years of my adult life.  I only have one house in one state.  And at the time of the bet, I had never been in a bike race let alone even own a mountain bike.  He had never finished closer than 90 minutes behind me at Western States.  I was going for buckle number seven and he five.  My best is 18:25 and my slowest was 20:20 in my practice year in 2001.  Alan’s best is 21:09.  We both figured I’d beat him at Western States but that he’d beat me at the Cream Puff. 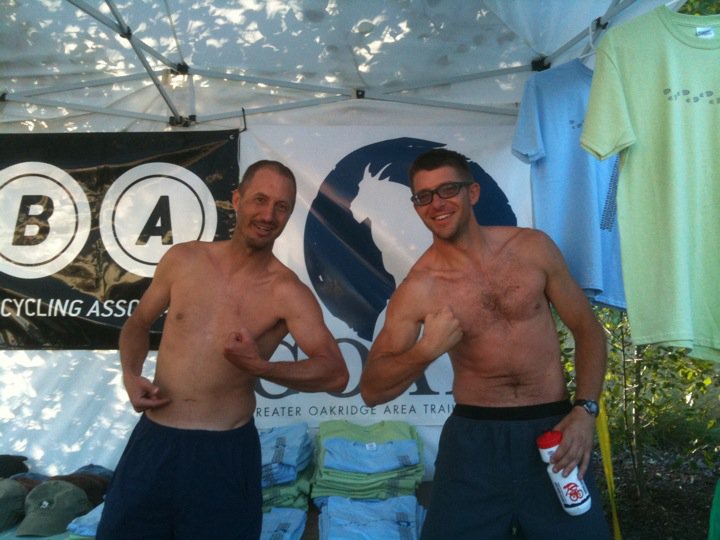 While Alan wouldn’t immediately agree to the $1000, he suggested that instead of the money being paid to the winner, that a donation be made by the loser in the winner’s name to his charity of choice.   My charity of choice was Environment Oregon, the environmental spinoff of OSPIRG, and his a new non-profit, G.O.A.T.S. the Greater Oakridge Area Trail Stewards, a chapter of IMBA whose mission “is to protect, create and enhance quality trail experiences for all trail users in the Oakridge area.”

The first part of the bet didn’t go as either of us planned or hoped.  You see, part of the deal was that we weren’t to wish bad races on the other which isn’t like either of us anyway.  Alan beat me at Western States, 21:10 to my 22:17 (link to my race report).   We both figured I’d have about an hour to an hour and half lead after WS.  He’d then have to make up the deficit on the bike.  Going into the Cream Puff with a 67 minute deficit to make up pretty much sealed the deal.  Of course, in any event of this length we both know anything can happen so I didn’t write the check to GOATS quite yet.  But it was going to require some miraculous acquisition of mountain biking skills on my part or a serious bonk or mechanical issue on Alan’s part.

So how was the bike race?  It was fun, well, except for my three crashes and the chafing on my ass that has now turned to scabs.  The course was a mix of gravel forest service roads and awesome single track.  It was not the same as the last few years and was basically two big loops with one little extra 6 mile loop of the challenging Saddle Blanket Mountain tacked onto the first loop.  It was supposed to have something near 18,000 feet of climbing and an equal amount of descending.  Everybody was saying that this course was faster than previous years and it turned out to be about one hour faster for the leaders. 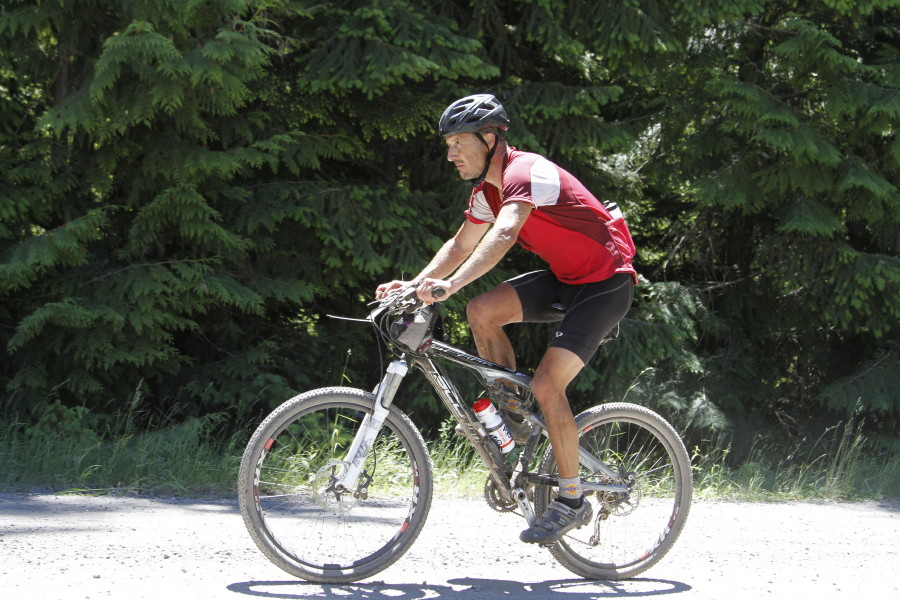 On A Gravel Road

The start was on paved road for about 5 miles until we turned onto the gravel road 1910 and began our 8 mile ascent for the first of two times.  I never really settled into a group because I rode uphill faster than I could ride downhill, especially late.  My aerobic endurance on the climbs late combined with my fatiguing upper body and deteriorating downhill ability just exacerbated the difference.  I think I passed 8-10 people on the last climb up Saddle Blanket Mtn only to be passed and beaten by all of them and more on the descent of Alpine Trail.

I had two pretty good over the handle bar crashes.  One on the first loop and the second only two miles from the finish.  The last one happend after I drank from my water bottle on a relatively flat section and while putting my bottle back in the holder, I went off the trail just enough to send me over the handle bars at a pretty good clip.  It knocked me pretty good and I noticed that my pink horn was in pieces but for the most part the body was ok and so was the bike.  I was only two miles from the finish so I put all the pieces in my pockets and rode down the last two miles, where, of course, I was passed by two more riders.  Laurie asked me if I thought I was Lance.  I had a flat front tire and I didn’t even know it. 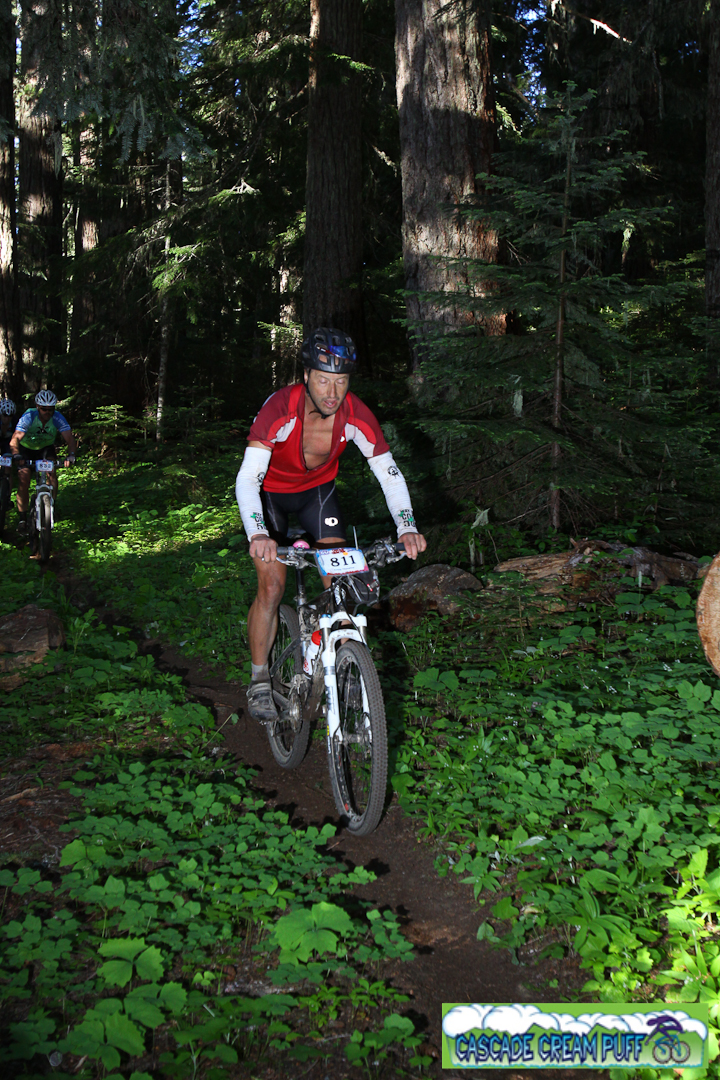 Riding With Eyes Closed? No Wonder I Fell.

I finished the Cream Puff in 11:45, 19 minutes behind Alan who finished in 11:26.  His combined time was 86 minutes ahead of mine.  Great job, Alan.  I will be writing a check for $1000 and presenting it to GOATS president Ben Beamer at the Friday pre-race meeting of Where’s Waldo on August 20 at Willamette Pass.  If you would also like to donate money to GOATS you can do it through me and we’ll present all of them together at Where’s Waldo, or send it to them directly and mention Alan on the check.

Will I do it again next year?  Yeah, probably.  But I’m not gonna commit until the scabs are gone.