Nothing motivates one to get in shape like a good goal, and I came up with a good one at Mr. Pickles Sandwich Shop in Red Bluff the other day while eating a Reggie-Reggie with Monkeyboy and the Thornleys. I was a couple days off my 3 week rest break, it’s the beginning of December, the nights are dark, cold and wet, and I needed some motivation. I know Craig’s a betting man because he’s sooooo sure of himself, so when he mentioned that after Western States he was going to race the Cascade Cream Puff two weeks later, a 100 mile mountain bike race in Oakridge, OR, I didn’t hesitate. “You vs me, combined time at Western and the Puff,” and without skipping a beat he said “Sure, how’s $1,000 sound?” 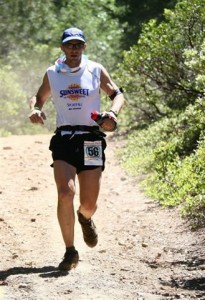 Now, I don’t want to take all of Craig’s part time job money like that, so we agreed to lower the stakes a bit and then sealed it with a fist bump. Not since Doug Schnelzer told me in high school that I wasn’t good enough to join the cross country team have I been as motivated as I am now. And thus, the 2010 Western Pickle Puff was born: 200 trail miles, 2 sports, 2 mountain ranges, 32ish hours, 35,000+ feet of climbing, countless gallons of electrolyte drink, and maybe a bit of vomit and tears. Two old men reveling in their past and the wives that love them. And besides trash talking rights before and after, the loser makes a donation to the winner’s charity of choice. When I win, Craig will be donating to the City of Oakridge Oregon’s Trails Implementation Plan to create some more sweet trails. I don’t think Craig’s decided his choice of charity yet, but does it really matter whether it’s the Ski Patrol or someone else? 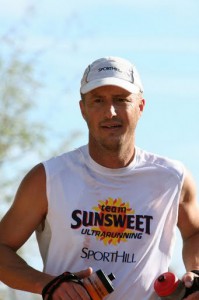 Western States comes first (end of June), and I know right off I’ll be giving Craig a cushion heading into the Puff. One of the ground rules being that we can’t wish ill performances on others, I’m accepting that things will look bleak for me at first. Craig’s PR matched with my worst showing gives him a 3 hour advantage, and turning it around (my best vs his worst) still gives him a 1 hour advantage. In 2007, Craig was in my sights on the Elevator Shaft after Cal 2 (mile 70ish) before I faded and came in 90 minutes or so back. I figure a 90 minute gap is about what I can allow and still pull it out on bike, since the Puff will be about 9 hours shorter in duration. 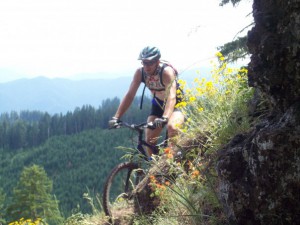 This gap dictates my strategy at the Puff. You see, Craig only recently went on a mountain bike ride, doesn’t own a mountain bike, has a bike helmet from the 80’s that looks like a foam beer cooler, and may in fact break his collar bone coming down the Alpine Trail if he goes faster than 15mph. Bikes shoes? Nope. Gloves? Nope. Shorts? Shirt? Repair kit? NO, NO, NO! All he’s got are shaved legs and misplaced confidence. How hard can a series of 2 hr climbs punctuated by 30 minute screaming downhills be, right? Ask your butt, back, and forearms that question at the finish. Craig was a bit stunned to learn that I actually have been racing bikes for 20 years, including jumping into some cyclocross and mountain bike races within the last year. I still got my skills, and I’m going to be doing tabletop jumps all the way to bank at the Puff! 90 minutes I can make up, perhaps even 2 hours, and I’m going to eat and have a massage before I even hear your screams on that final downhill into Westfir. 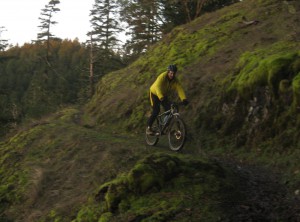 And, I’m going to put pressure on you up front, because in getting ready for Western, I’m going to run in the rain, the cold, the snow, and the mud. I’m going to attend training camp for a few days, and maybe even do the Ice Cream Sandwich Run and clock a 1:15 to Cal 2. I’m going to lose a few pounds, and do a lot more stretching. I may even do a bit of track work at our dirt track to get the leg speed. I’m going to bring the gap to an hour, and I’m not going to puke this year. In short, I am motivated. Dougie Schnelzer-level motivated. And yes, I kicked his butt too. I will let the City of Oakridge know to start warming up that trail machine so we can cut some trails the day after the race.

So let’s hear it: Who do you think is going to win, and if you think it’s Craig- how about offering up some trails money when he lets you down? Anyone have some tips for Craig on how to ride a bike, best type of chamois cream, and how to crash the right way?