Time for a little WS synchroblogging fun again.  This year, AJW (five straight WS top ten finishes, six silver buckles), Hal Koerner (five WS finishes, two cougars), and Meghan Arbogast (three top ten WS finishes) have agreed to join me (six WS finishes, two top ten) on a series of blog posts leading up to the 2010 WS race.  Each of us is in the race this year so we’re thinking about the race once or twice an hour 🙂  We’re each going to answer the same questions submitted by readers, and like last year’s synchroblog, we won’t read the other posts until they are published.  Send your questions to me via email or comment on any of our posts.  If we use your question you’ll get a Conduct The Juices shirt.  Ask about WS specifically, ultrarunning generally, or if you have a personal issue you might want some help with, go ahead and ask and we’ll see what happens.  Here are the first two questions.  Enjoy.

Mr CPK asks: “I know a friend who is a very good marathon runner but ended up in the hospital after his first WS due to rhabdomyolysis.  I’m running my first WS this year and wondering what I need to do to keep this from happening to me?”

Mr CPK, I have had several friends also end up in the hospital for rhabdo (and acute renal failure).  They were/are very good runners so it’s obvious that because you’ve run fast on the roads or shorter ultras it doesn’t imply that you’re automatically going to be able to race with the big boys and girls at WS and come out unscathed.  It takes some work ahead of time and you gotta be smart on race day, but it is very possible for a first-timer to be Haggin Cup worthy.  The simple answer to your question is to train your quads to handle the downhills, get heat-trained, stay hydrated, keep your sodium levels up, and do not run beyond your level of training. How hard can that be?  For most, not that hard, for some, really hard. 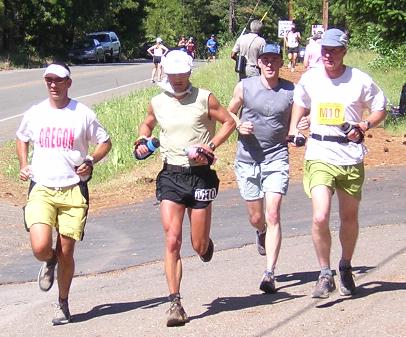 Simply, rhabdo occurs when you’ve destroyed your muscles and the contents start leaking into the bloodstream (myoglobin).  While this could theoretically happen with any skeletal muscles, the obvious and the most vulnerable at WS and other 100 milers are the quads.  The eccentric contractions (the muscle is elongating while flexing, sometimes referred to as the “negatives”) from all the downhills is often the culprit for rhabdo.

Training is obviously important to prevent the muscles from being destroyed.  23,000′ of downhill is a good amount and it should be taken seriously.  If you can’t get into the WS canyons, find long 3-5 mile downhills and do them many times.  In Oregon we go to Rooster Rock where we’ll often do a 22 mile run with 9000′ of downhill (and the same amount of uphill).  This absolutely destroys my quads.  I did this just a week ago and my quads were sore to the touch for about 5 days.  I’ll continue to do long runs with as many as 12,000′ of downhill, with my last little quad stimulation about 14 days before the race.  You could also try to do eccentric weight training (lunges, squats, the lowering of leg extensions, etc) but I would be scared to start WS if I had only done weights for my quad training.  Oh, another thing to keep in mind is if you get injured before the race and your highly conditioned quads become detrained.  If you get your quads in great shape by April but then are injured in May, make sure you either get the quads retrained or adjust your goal on race day to reflect your current preparedness.

Staying hydrated and keeping your electrolytes balanced is also important on race day, and is much easier if you’re heat-trained.  Even the best trained runners will have some level of necrosis in the quads.  The myoglobin that is released into your bloodstream is big and may plug up your kidneys which can lead to acute renal failure.  That is not something any of us want to experience.  Keeping hydrated and urinating can help flush that bad stuff out and keep the kidneys from plugging up.  But the bottom line is don’t run the downhills harder than you are trained.  Oh yeah, and stay away from the vitamin-I.  If your quads are killing you it’s probably because they have been killed.  Don’t mask that pain.  Finally, while I hate to write this because I don’t think anybody should have this in their head, if you know you are doing serious damage don’t forget that dropping out and coming back another year more prepared is an option.  AJW may not respect you but your family and the race organizers might appreciate it.

If you want a more medically sophisticated explanation, Dr Lisa Bliss, a former WS Medical advisor wrote about rhabdo in 2007.

Chubster asks: “I run a bunch of ultras, 100 milers are my favorite.  I am usually in the top five, top ten if it is super competitive.  Even with all the training, I have elevated love handles.  I don’t mean a little elevated, I’m talking waaay higher.  What can I do?” 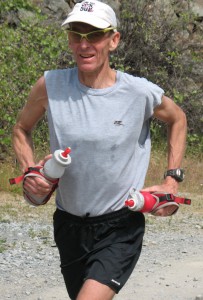 Chubster, if you’re that good and you’re asking this question you must have self-esteem issues, too.  You’re probably on the edge of complete meltdown, but I’m not a psychiatrist so I don’t think I can help you with that.  I will offer you a suggestion regarding your fat: Quit drinking so damn much beer.  How many beers are you drinking each night?  Two, Three, Six or more?  Stop it, you besotted narcissist.

While each winter I seem to store a few extra pounds, so far the weight hasn’t been that big a deal for me at WS.  Sure, running uphills and dissipating heat is hampered, but we need some fat to mobilize as fuel.  I’ve been between 141 and 152 on race day since 2001.  Interestingly, I ran my slowest time when I weighed 141.  If you really think you’re fatter than you should be, you could try the SLF weight loss method:

If you do all three of those things, within a couple of months you’ll be as light as SLF (125 pounds soaking wet).

See how my other synchrobloggers answered these questions: