We will start accepting applications for the 9th annual Where’s Waldo 100K on March 1, 2010.  Race date is August 21, 2010.  We are one of the few races that still do apps the old fashioned way:  You have to print out the application from the website, fill it out, write a check for $90 (or more if you want), put both in an envelope with a stamp, and then give it to the US Postal Service.

While the complete 2010-2011 Montrail Ultra Cup has not been announced yet, Waldo will be in the MUC for the second year in a row.  You must finish two races to be eligible for series prizes.  The top two male and female finishers at Waldo will earn spots in the 2011 Western States 100.  We’re also in the Oregon Trail Series.

We will be offering prize money to top finishers, courtesy of Sunsweet Growers, as follows: 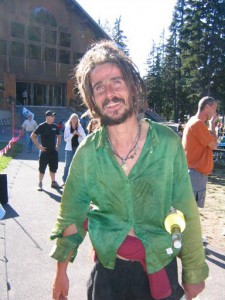 As usual we have our unique Waldo awards, including Find Waldo, Wet Waldo, and Show Us Your Waldo.  The latter, which is accessible to all runners whether you run 9 hours or 18 hours, is judged subjectively by each of the aid stations and is awarded to the runner who shows the best or most “Waldo.” In addition to a comp entry into the 2011 race, some schwag, and the crazy perpetual hat that you must return with your own contribution, Sunsweet is putting up an additional $250 for that award.  We have no idea what that is going to do, but we expect our aid station volunteers will get a good show.

The race is very active in trail work on the trails used on the course and surrounding area.  We are a benefit for the Willamette Pass Ski Patrol and have donated over $31,000 the past eight years.  Thanks to all the sponsors, volunteers, and runners who have made this a great race.  We’re especially thankful for the continued support from the City of Oakridge, Oregon.