Robert Blair is a “two time loser” when it comes to 100 mile races.  He entered AC100, which was cancelled by the largest fire in L.A. history, and the Chimera 100, which was ultimately cancelled after 7-8 hours due to severe and unsafe weather.  Here’s the Southern Californian’s report about Chimera, which was his first 100 mile start.

Ever wonder, like I did, why there are not more 100 mile ultra marathons scheduled, even in a “warm” state like California, in the month of December?

Wonder no further. Just look to the running of the 2009 Chimera 100K and 100 mile races, which started and ended (for everyone) this past Saturday, December 12th at Bluejay campground in the Cleveland National Forest, between San Juan Capistrano and Lake Elsinore, CA.

The Chimera 100 website states that, “The Chimera is a beast from Greek mythology.  According to Homer it is part goat, part lion, and part serpent.   The question remains, which is the Chimera – the ultra-runner or the mountain?”

This year, unfortunately, the Chimera was neither the ultra runner nor the mountain, but the weather. 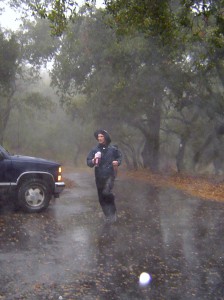 Is This Southern California?

After the runners were out for about 7 hours, the Forest Service and Race Director, in conjunction, cancelled the race due to the worsening weather conditions on the course.

Runners had experienced extreme wind, cold and rain on certain sections, and an even stronger and colder storm was predicted for the late afternoon and evening, with snow levels dropping to 5,000 feet (500-700 feet below two of the peaks that 100 mile runners would have to run up to three more times during the afternoon, night and/or following morning).

However disappointing, it was the right call to make. Some runners, who had made it past the 28.5 mile Maple Springs aid station before the race was called, were able to run all the way to the Silverado aid station at approximately mile 38.2.

Brandon Adame made it there a few minutes before me.  I made it there, along with Flaco Mendoza a few yards behind, in 8 hours flat.  I thought that was alright, given I was also carrying a few extra pounds of water in my thoroughly drenched “Gore-Tex” Montrail shoes, “Dry-Max” (right!) socks, and my “rain proof” Columbia jacket/shell and hat, and “rainproof” Red Ledge pants.  The Columbia rainproof hat was actually pretty good! J

What I enjoyed and appreciated most about this year’s race, besides my excellent crew of Cheryl Zwarkowski, and Jose Hernandez (who would have been my pacer had I gotten to mile 62) were the absolutely kind and giving volunteers at the start/finish, and all the aid stations we arrived at in between, and the stretches of the race I ran with other runners.

Miles 1 through 21 with 20 year old Cavin Miller, living in Southern California going to school, but originally from Cool, CA, or another similar town, that I forget the name of, that borders the Western States 100 mile course.

We’d met and ran together on a training run 5-6 weeks before, with Cavin just carrying one water bottle the 26 miles from Bluejay to Santiago Peak and back (there was a water drop that he would use at miles 5 and 21), and me planning on running 40 that day, carrying a full, 3 liter Camelback, two 22 oz. hand helds, and two more full in the back of my Camelback.

Miles 9 through 34, with Brandon Adame, who’d beaten me by 34 minutes in August’s Mt. Disappointment race, and in other races this year as well, and who I had hopes of finishing ahead of in this race as a good measure of my improvement.  By race time, due to the impending weather, I had decided I didn’t care if I placed ahead of or behind Brandon, or anyone for that matter.  I wanted to run a good race and hoped that I, and all runners, reached the finish line safely. 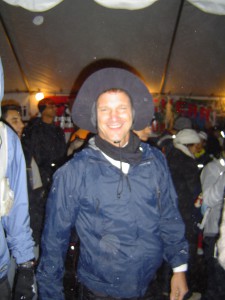 When Brandon caught up with me at mile 9 (he’d passed me at mile 3-4, but was one of several runners who took a wrong turn at a confusing junction on the 9 mile loop at the beginning of the race) we had the greatest time, just marveling at the weather, and talking about our racing in the past year, and talking about what was upcoming on the course in this particular race. By mile 23, it seemed to me that Brandon would again be stronger than me on this day.

At each downhill he pulled away 100-300 yards, only for me to catch up again on the next uphill, because he was removing a small rock from his shoe or taking a “restroom” stop, or he just was taking it easy and running conservatively early in the race.

By mile 34, just before we got to the turnoff for the 3.2 mile, rocky,  single track to Silverado Canyon (mile 38.2), Brandon had pulled ahead of me,. probably for good, because my quads were already starting to not feel so good.

Brandon called me the next morning to ask how I was feeling. He said he was going to go on a 10 mile run. I told him the only places I was walking to on Sunday would be my couch to maybe catch part of a football game with my four and a half year old son, Benji, or to my backyard, to secure a flowering pear tree I had recently planted that had almost been ripped away by the wind from the latest storm. I live two hours north of the Chimera.

Miles 14 through 38.2 with Adalberto “Flaco” Mendoza, who had given his time all late spring and summer, running, and sharing his advice, with me and my friend Jose Hernandez, on all sections of the AC100 course.

Jose, Anibal Corsi, Carlos (Flaco’s usual pacer, and close friend, for 100 mile races), and I, had special, long sleeved shirts made for us to wear during the 2009 AC100 that read “Team Flaco Mendoza”, out of respect for Flaco and all of the time he had given to us during the year, and also because the AC100 RDs had unceremoniously, but legally, sent back his check, which was truly in the mail on the very day that the AC RDs had closed the race on June 1st and allowed no further entry.

That is when we decided to make and wear the shirts. We would have Flaco in the AC100; we would be running for him!

The 2009 AC100, as you know, was eventually cancelled, so I would be wearing my “Team Flaco Mendoza” shirt over an Underarmour “coldgear” one, and under a rainproof shell for the Chimera 100 mile.

Before the race, Jose told me that Flaco had injured his foot on a night run two weeks before, but if that was the case, it sure didn’t seem like it in this race.

Flaco caught up with Brandon and me at the Trabuco Trailhead aid station, (about mile 14?) wearing only shorts, shoes and a long sleeve shirt, under a very wet and whirling Hefty trash bag.

“Hace muy frio, Roberto!” he said. (It is very cold). “La lluvia y el viento, no son muy simpaticos, tambien.” (And the rain and wind are not very nice either.)

“No, no they are not, Flaco.  Flaco! You do not have a waterproof rain jacket?”

“No, no, mi amigo. Solamente tengo este.”  (I only have this, he said, looking down at his less than reliable Hefty bag poncho).

“OK, but if you change your mind, Flaco, the jacket is yours!”

From mile 14 through 34, Flaco shadowed Brandon and me, never farther than 100 or so yards behind.  Each time Brandon and I would quicken our pace for a stretch, and look back, expecting to have dropped the 58 year old Flaco Mendoza behind, there he was, with his Hefty bag poncho, whirling above his waist, in the wind, cold and wet, undefeatable, tireless, like the great ultra runner that he is, injured or not.

My greatest honor was to be running down what would be the last 3.2 miles of this race, down the Silverado trial, with Flaco, only 40-50 yards behind.  As my quads felt a little “less than happy” going down this trail, and I thought that Flaco surely could pass me if he wanted to, the thought did cross my mind that maybe Flaco was just staying behind me to make sure I was OK. He had run many 100s before, but this was my first one.

So humble, this man.

When we got to the Silverado aid station I was ready to tell my great crew, Cheryl, that it was no question, I would be changing into a new pair of socks and another pair of shoes. Please get the foot powder out.  Even if my feet can only be dry for an hour or so while running from Silverado back to Maple Springs at mile 45.4, I’ll take it. I’m changing my shoes and socks at mile 62 as well.

“But where is the chair?” I asked Cheryl.

“Robert, I have some unfavorable news.  Due to weather and an even stronger approaching storm, the race is cancelled.”

Trabuco AS Blown Up

Forty-eight hours after the race, my two and a half year old daughter, Shana, still beats me in a footrace from the fireplace in our living room to where our kitchen begins.  We held a second heat and, in what gives new meaning to the nefarious term “two time loser” Shana beats me again.

“But I still have a faster first step!” I brag to my wife.  She shouts back that it’s because I was the one who said “ready, set, go” and I left out the “set” part, but please, please, believe me, that’s not true.  Well…it kind of is.

I awaken this morning at 3AM (still on race day schedule I guess).

I walk down, and up, the stairs without much of the soreness that accompanies those trips in the previous 2 days.  I eat my standard Cool Mint Chocolate Clif Bar, a banana with a glass of water, and those “Juice Plus” pills my wife had me start taking late last year.

“Yeah,” I think to myself smugly, “I’m feelin’ pretty good.”

I have grand hopes of not getting “chicked” again today, and being able to beat my two and a half year old daughter in a race…at least…to the front door.