Passing the final guy at the 1 mile to go sign on the road back to town from the trails, I was booking but I just couldn’t shake him – the him, the guy I just passed, I could hear his foot steps right behind me. 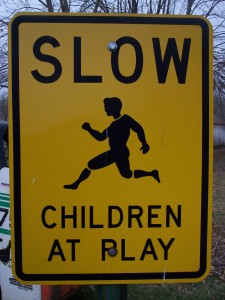 Oh yes, while you were all racing the who’s who in Who Ville in Cool, I was racing too in Kentucky, a 60K – I was racing…um……well…a candy bar. I had just run 36 miles of my 37 and change mile race…..at my pace…Some may know that I run with the grace of a piece of stranded meat in the woods…hence…the name. Just earlier in the week had run some 800’s in a blistering 3 minutes…now I was trying to muster some of that blinding 3 minute half mile speed….CB speed.

He was still hot on my back, sounded like he was sitting almost on my shoulder, like Galen Rupp breathing down my neck at the NCAA’s…like Nick Symonds breathing down my neck at the Olympic Trails 800…the dude I just passed at the mile mark, I just couldn’t shake him even though when I passed him, I blew by him……I would pick an object, like a cone on the road or a telephone pole and surged, like darn near sprinting, arms pumping with karate-chop-hands like Carl Lewis, Lewis Taylor or whatever his name is until I ran to the object that I had picked out, then I would kick again. Still couldn’t shake him, I am thinking, “geez, this guy is tough”…this Galen guy on my shoulder…I drop the hammer even more, showing him that 3 minute 800 meter speed I had polished earlier in the week….intimidating, I know..… without slowing down I surged again, I still hear footsteps right behind me, again and again I surged, still I could hear those foot steps right behind me all the way.

So with about 300 meters to go, that’s 330 yards for you old school, we swing…, me and the dude, the Galen dude, I passed at the mile to mark, swing, we swing around a downhill corner — I figured if I had about 10 meters on him, that’s 11 yards, I was just going to go for it and sprint to the end…if I had less, I was going to slow down (I am good at slowing down by the way…among the best in the world I think) and force him to the front, the dude I passed with mile to go, him, force him into the lead so I could unleash my Nick Symonds 3 minute 800 meter speed with perfect timing. I wanted to start the sprint from behind him, the dude I passed at the mile to go, him, rather than being in front. So I turn around to look at the guy(him)—Galen..and nobody was there, in fact, I can’t see anyone behind me on the road….,…turns out I had dropped him like a rock nearly putting 3 minutes on him in the in final mile.

The footsteps I heard behind me?????? It was the candy bar in my back pocket of my running vest flopping around…the guy was never behind me,…the candy bar flopped and thudded every time I took a step, tricking me into thinking that he was right behind and I was running scared all the way to the finish, because of that I almost caught the person ahead of me for the masters win???!!!

Oh that candy bar had been flopping back there making noise for miles….I just never paid attention to it until my mind decided to think there was a reason…you see…we ultra runners all have a few things in common…yeah, whether you have two last names like Jones-Wilkins, Lewis Taylor or just one last name with two LL’s when everyone else spells it with one L — like Willson…or a made up name like mine because you run with the grace of stranded piece of meat…yes, we share some common traits… 1) We are all paranoid schizophrenics in the final miles…2) We really wish we had 3 minute 800 meter speed at the end….so, yes….I outkicked that candy bar in my back pocket and I was pretty damm proud it too by the way, …it was good for a 6:20 final mile, the candy bar ran a 6:20.01..….