I heard a rumor that somebody on the east side of the cascades doesn’t think there really are Conduct The Juices shirts.  That Soderlund didn’t actually take a shirt from AJW.  Well, not only are there t-shirts, but there are also a limited number of hoodies.  And tonight, MonkeyBoy and I went huntin’ in our hoodies.  Felt like Rocky Balboa training in Philadelphia, except we were running on Ridgeline trail in Oregon. Tapeworm took the picture because he doesn’t have a shirt yet. 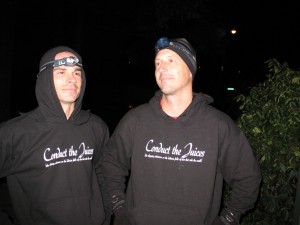 Huntin' in the Hoodies

So what’s huntin’ you ask?  A couple of years ago we were running at night on the roads in Eugene and were wearing bright orange and yellow clothing so we’d be visible to drivers.  We run by a fast road/track runner and without missing a beat he says, “You guys out huntin’ tonight?”  So now that’s what we call any night run.

There you have it.  Proof that there are Conduct The Juices shirts and little insight into the strange world of ultrarunning in Eugene.