Yes, besides marrying my practice wife this was the most insane thing I have ever done.  But, for this event I prepared well. The 24-hour round-y-round has always intrigued me for some strange reason so I knew that I would some day have to check it off my bucket list.  The day (days) came on Sept. 18th-19th at the North Coast 24-hour.

The Scene: Edgewater State Park, .92 mile loop (yes, I meant to put that dot in front of the 9). Sara and I arrived at 7:30 for the 9:00am start.  I picked up my packet with two bib numbers and timing chips so that you could put one on your day shirt and one on your night shirt – oh that should have been a clue. Next, we found Connie Gardner who took us under her wing and let us set up at her tent, then told her crew to help me with whatever I needed…wow. If you have never been to a 24hr event it looks very similar to one of the mountain stages in the Tour: just past the timing tent on both sides of the path are wall to wall tents for about a 1/4 mile. Crews/family get very creative with their attempts to stand out so that their runner will be able to pick them out deep in the night.

The Race: The RD said go….about 7:30 min. later I had the course memorized.  Oh boy this is going to be interesting.  From the gun I knew something was wrong, but I also knew I had plenty of time to figure it out and fix it so I kept going round and round, waiting to find my groove. Somewhere at about 4 hours my little toe on the right side had a baby.  I sat down and took a pin off my bib and stabbed a couple of holes in it. Problem number one solved.

I still have not been able to figure out why I’m working so hard to maintain a slow pace.  Am I overtrained, not eating/drinking enough, being whimpy – I can`t figure it out.  Fast forward to somewhere around 6 hours.  What the hell was that?  A defect no doubt but something happens to the fragile male ego when an attractive woman with a prosthetic leg passes you. I acknowledge the fact that it makes me a little man but the feeling was like letting the air out of your life vest….you’re going down!  This was about the time Sara showed up with a great looking dinner, so, I took a break.  Time for plan B, but I didn’t have one.  I was totally focused on my goal of 145 miles.  Still able to do math I realized that my 50 mile split was toast as was my 100 mi split … no way I was going 145 … ok, uh, how about 18 hrs for 100 miles?  Well, that didn’t happen either.  My big toe on the left side BLEVEd at about 8 hours.  Soon after that both my plantar fasciae collapsed.  Now it was getting interesting. 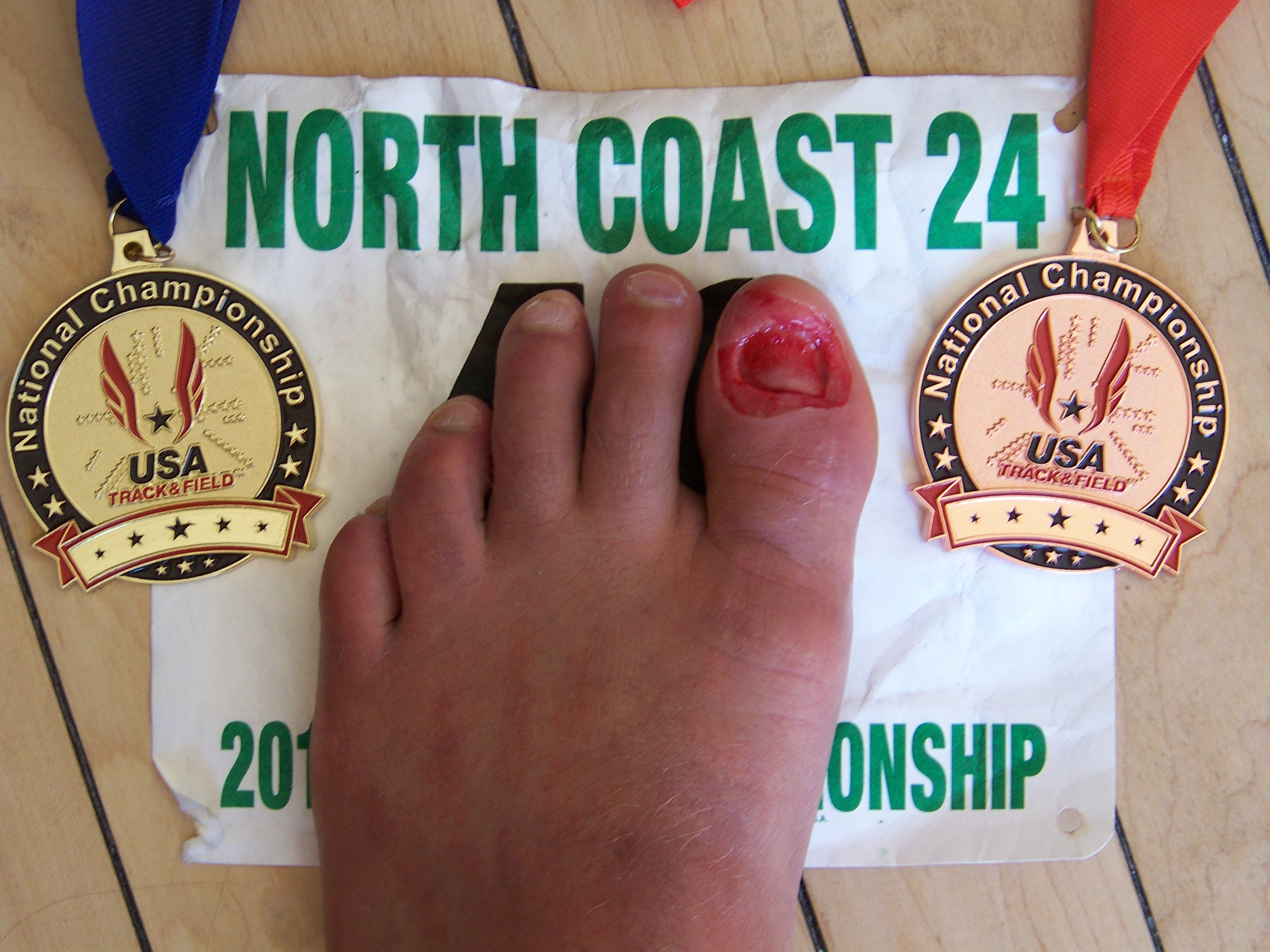 As I was closing in on 100 miles I knew I was nearing one of the greatest physical achievements of my life.  I also knew I was going to do some walking.  Just when I thought nothing else could hurt, my eyes started burning.  Man, if I could just close them for a few seconds – hey why not – so I started closing my eyes on the straightaways figuring that the worst that could happen is I’d drift off onto the grass and tip over … they really need botch dots on these paths.

I was done at 100 miles – my walking and running pace finally merged.  I walked for the next 4.5 hours until my wife started teasing me.  I was somehow able to run the last half hour.

The Results: Never be afraid to try even if you sometimes fail. I didn’t even get close to my goal, but I had a blast trying. I know I can do better, but as of this posting I hope I never have the opportunity to try.

The Facts: 11th overall / 7th male – Debbie Horn, my hat is off to you. I think this is the first time I’ve been chicked by someone in my age group. 1st 50yo male national age group champion and proud of it!