Here are some stats about the 2009 Where’s Waldo 100km held this past weekend at Willamette Pass Ski Resort in the Oregon Cascades.  Congratulations to all the finishers and to those who started and gave Waldo a shot.  See the Waldo web site for full results and splits. 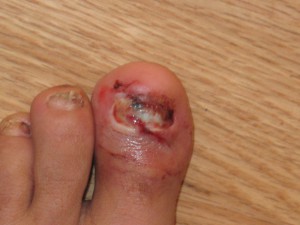 Even the RD's toes take a beating

Did I miss any numbers?