In politics, they say Social Security is like the electrified third rail on the subway. Nobody wants to touch it because they can only get hurt doing so. In ultrarunning, mandatory volunteerism is a similarly charged subject. How could you argue with something so noble as volunteering. Well, at the risk of electrocuting myself, I’m going to challenge this notion. Not because I think volunteering is bad, but because I think it could be better.

Let me start by examining the many benefits of volunteerism, specifically to our sport of ultrarunning.  “The culture of volunteerism is healthy,” says Blake Wood, veteran ultrarunner and member of the Hardrock 100 board of directors, one of the few 100 milers that doesn’t have a mandatory requirement.  I wholeheartedly agree with him. In fact, I spend more of my own time doing volunteer work than I do paid work (see About Me).  Giving back to my community is rewarding, fulfilling, and it just makes me feel good about myself and my community.  It is healthy. 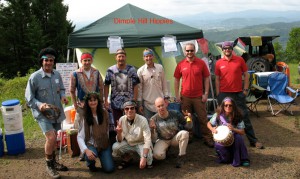 “One of the best things about our sport is that nearly everything is done by volunteers,” writes John Medinger, publisher and WS board member, in this month’s Ultrarunning magazine.  Our races often require more volunteers than runners.  WS has 1,300-1,500 volunteers on race day for the 400 runners. Where’s Waldo has about 150 volunteers for a little over 100 runners.  If race directors had to pay for aid station help our entry fees would make races prohibitively expensive or we’d have aid stations with minimal or no service.  No doubt, our sport benefits from volunteerism on race day.

The benefits of ultrarunners doing trailwork are perhaps even more significant than race-day help.  As Charlie Crissman, RD for Cascade Crest Classic 100 miler, which is implementing a new trailwork requirement for 2009 points out, “there is great PR value for CCC if I can point to almost 1,000 hours of volunteer time on trails as a direct result of the race. If the Forest Service decides they don’t like the event then it’s over.”   My Co-RD, Curt Ringstad, many friends, and I have been doing trailwork on the Waldo trails for the last eight years (see our trailwork page) and Charlie is absolutely correct.  The relationship we have with the Forest Service is strengthened by our efforts on the trail.  When we wanted to use an abandoned trail for the new start in 2007, we had the support of people inside the Forest Service and it was allowed to happen if we replaced two atrophied bridges.  They trusted us to build them, we did a great job, the new start is awesome, and now hikers, riders, and runners enjoy the re-opened trail.   Does Where’s Waldo equal trailwork in the eyes of the Forest Service?  Maybe.  Do they want to lose that?  Probably not.  That’s a powerful position for the race to be in and it’s a direct result of volunteerism.  Rob Cain, race director for SOB 50K in Oregon and adopter of a section of the Pacific Crest Trail, agrees. “There is a real leverage available with the Forest Service via volunteer hours,” he says. 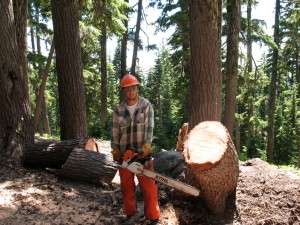 So, you may be wondering, Craig, what’s your problem?  It’s all good isn’t it?  My problem is that requiring volunteerism denigrates the contributions we make. It calls to question the authenticity of our efforts.  And that bothers me.  Yeah, perhaps I’m a bit idealistic, but on more than one occasion, I’ve joined work parties on the WS trail and have been asked by people who don’t know me, “So, you’re doing this to fulfill your volunteer requirement?”   Absolutely not.  I’m doing it because I want to help.  Just being asked that question taints the satisfaction I get from volunteering.

For those runners who are volunteering just to satisfy the requirement, I question just how good that help is.  I fill out several forms a year for folks fulfilling a race requirement, and generally they’re good workers.  But on more than one occasion, I’ve been out on a long day of trail work when, with several miles to go, we hit 8 hours and someone tells me they’re done.  What?  Whether they are joking or not, it seems very wrong that they’re looking at their watch instead of the job that still needs to be done.  Do we want or need that kind help? I want people who want to pitch in, not those who are fulfilling a requirement like some high school kid trying to get his community service done so he can graduate.

It also seems a bit short-sighted, to make runners give back in the same year they are running the race.  Can we look at the contributions a runner makes over their career or lifetime instead?  How many first year runners are going to be race directors?  I don’t know of any.   Then there are the Grand Slam runners who are forced to do work for all the races in the Slam in the same year they’re trying to run four 100s.  For many, it may work out naturally that they have more time to do volunteer activities later in their lives when the kids are grown or they’re retired or they’re not training for hundreds of hours.  How many active 100-mile runners are on the WS board of directors?  Many are older and don’t race as much anymore and there is nothing wrong with that.  It makes sense.

Finally, if we’re trying “to induce runners to give back to the sport” as Vermont 100 claims on their website I question whether this is the only way to accomplish this.  Putting aside the philosophical and political arguments of libertarianism, which might lead us to conclude that races should completely stay out of runners’ lives, can we do this another way?  I think we can.

We need leaders to organize, mobilize, and inspire runners to help.  Let’s be the example so others can follow and model the behavior.  The work that Mark Falcone, Tim Twietmeyer, and Matt Lambert have done the last few years is a great example.  Getting Duncan Canyon re-opened required over 1,000 hours of volunteer time (see ws trailwork).  By organizing the half-day work parties the last few years, much more has been accomplished than in previous years.  Is this because of the requirement?  I think not. They provide an opportunity for us to help.  And we are inspired and motivated by the work that Mark, Tim, and Matt are doing. Without these work parties how would a person do trail work? We don’t need a requirement to help you, we need leaders and opportunities.

Would we get fewer volunteer trailwork hours? If you do think we’ll lose volunteer trailwork hours then perhaps you could adopt a policy similar to Hardrock in that trailwork hours increase your chances in the lottery.  But, we’ll address the lottery in a subsequent post.  Blake says Hardrock has no problems getting help on their trailwork weekend.  I would argue that you won’t have problems either.  So, my request to the WS board of trustees: reconsider the mandatory volunteer requirement. Give us a chance to show that we care about the trail we run on and the race we get to run. Let us runners feel the satisfaction of authentic volunteerism.  You are in an influential position in that what you do drives the standards and traditions of our sport.

This post is the first in a series of five Western States 100 synchroblogs leading up to the 2009 race.  For this first one, the following four bloggers have agreed to write a post making a plea or request directly to the Western States Board of Trustees.  See what they have to say to the board: