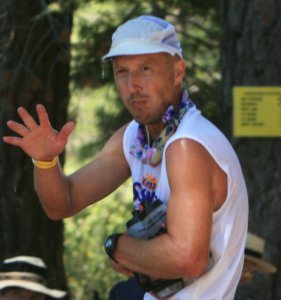 I couldn't eat another bite

After missing last year due to an injury I got 21 days before the start of the 2006 race, I was determined to get to the starting line of the 2007 race healthy so I could run when Dr Lind fired the shotgun at Squaw Valley. I really wanted to get in the top ten again but the field was so deep with fast guys I figured I needed an awesome race to get there. Ahh, but 100 milers are always filled with surprises and struggles. Well, for most of us at least (AJW excluded), and that’s part of the reason I love running them. Being fit and healthy alone doesn’t get you a top finish.

“Old guys rule!” That’s what I heard several times during the early miles as I ran with masters veterans Dave Terry and Tom Nielsen to Robinson Flat. These guys are WS studs. Together they have 16 finishes and most of those are sub 20 hour top ten finishes! Good place to be, I figured, as we all arrived together at Robinson Flat at 10:20am, 5 minutes off my estimated splits for an 18:12. But the old guys rule pack splits up as Dave goes ahead after the aid station, I walk up Little Bald Mtn eating my second 1/2 turkey, cheese, avocado sandwich, and Tom gets out of the station last, struggling with a back injury which eventually ends his race early at Last Chance.

The downhill section from the top of Little Bald (31) to the Swinging Bridge (46 mi) at the base of Devil’s Thumb climb is, according to my plan, supposed to go fast. But it ain’t happening for me. My stomach is a little yucky and the exposure and altitude seem to be taking a toll on this old guy. I know I didn’t drink much on the way to Dusty Corners (38 mi), but I don’t get weighed until Last Chance (43 mi) where the scale says 142. I ask to step on the other scale which seems to offend the volunteer, but that is 5 pounds down from my starting weight of 147. The second scale also says 142. Uh, this isn’t good. I’ve never been that far off my starting weight. If I really am dehydrated that much that probably explains why I’m not running very fast. I have a good conversation with another volunteer as he walks out with me with a cup of soup. I drink both 24 oz bottles of water and take 2 S! Caps on the descent down to the Swinging Bridge. Refilling both bottles at the creek past the bridge, I consume another 24 oz and another S! Cap on the steep climb up to Devil’s Thumb.

The climb feels OK but it isn’t fast – I think it was about 39 minutes. Somehow I get past two big name runners in this canyon, not because I’m moving well, but because they aren’t. However, my biggest concern is that my weight is back up when I get on the scales at the top of the climb. The scale says 151. What? Again, I get on their second scale and it also says 151. I gained 9 pounds in a little over an hour?

El Dorado Canyon is not very quick either but I don’t see another runner – either passing me or passing them. Is there anybody else in the race? The climb to Michigan Bluff is slow and when I step on the scales there I’m back to 147, my starting weight. I sit in a chair in the shade as planned and eat part of another sandwich and drink a mountain dew. The ice massage I get feels great on the legs, but, still feeling like the dead daisy I’m looking like, I walk out of Michigan Bluff in 19th place thanks to a drop by a Frenchman. I’ve got two women in front of me so that means I’ve got to catch 7 men to get the tenth spot. Chris and Ticer assure me it is doable. I actually do believe them at this point.

I continue to run without seeing another runner to Foresthill (62 mi). The pace is still slow and I just can’t believe nobody has caught me. Ticer and Greyson meet me at Bath Rd and we walk up as I drink a Pepsi. They inform me that AJW is running great and that Jeff is also way ahead but having some issues. There are some big names struggling ahead so top ten is looking possible if I could just get going. I leave Foresthill with Chris and we are in 17th place (15th man) with a couple of runners (Kami and Alan) in the aid station as I leave. Not a good sign that I’m concerned with the runners that are catching me more than I’m thinking about the runners ahead.

We run slow past Cal 1 and on the flats to Cal 2. We hear voices frequently, but still, nobody passes us. Finally a runner catches us and zooms past us. It is young James Bonnett being led by his pacer. Next to pass is Guillermo Medina and his pacer Angel. They are very friendly as they pass. Chris is doing a great job trying to keep me in the game. He reminds me that I won’t be in this funk forever, that I will feel better when it cools off, and that I can hammer from Green Gate in since I’m not running hard on Cal St. But he knows that getting passed this late is not good for my head.

We get to the river in a little over 3 hours. Hmmm, not the 2:45 I wanted, but really not that bad. Twiet is standing there on the near side and tells me to get going and to “wash the salt off your shorts, Thornley, that’s bad form!” 19th place with Guillermo exiting the river as I enter. Greyson, Ticer, and Renee are on the far side and they are all still acting like I’m in the game for tenth man. Whether they really believed it or not didn’t matter to me at the time. I drink a pepsi as I walk up the first part of the climb to Green Gate. We’re walking well and after I finish the pepsi I begin to run. We see Guillermo and Angel and they seem impressed that I’m running. But Guillermo tells me he’ll catch me on the track and beat me by 5 seconds. We all get a laugh out of that as he is referring to Angel holding me off at the end of Angeles Crest last year. Me sprinting like a crazy fool to catch him in the darkness to no avail.

I leave Green Gate in 18th place with Ticer pacing and a boost of adrenaline from the volunteers and crews there cheering wildly. The climb to the Gate was under 30 minutes which was my predicted split – for the first time all day! If I can keep this up I just might be able to pick off the carnage that is sure to be ahead. Yeah, sure.

My weight has been good since the roller coaster in the canyons, the peeing has been minimal although nothing to be concerned about yet, and the legs are good, but each calorie I try to consume is a challenge. I get a gel down and a few minutes later I take a bug to the back of the throat. Yep, it starts a puking episode and I continue walking, puking, and then dry-heaving for what seems like 5 minutes. Like any good pacer, Ticer offers no sympathy to my plight. We both behave like this is perfectly normal. We continue moving towards ALT where I refuel with the standard potato soup and coke. 15 more miles, 18th place, with the next runner “about 15 minutes ahead.” Not looking good.

Lewis was asking me on the way back to Eugene two days after the race how do you stay in the competitive mode when you’re miserable and barely moving? He wanted to know if this was a learned behavior or something you’re born with. Lewis, I’m not sure what the answer is, but I was definitely being tested at this point. I was well off my splits, had puked, and was moving so friggin’ slowly, yet I still stayed in the game the best I could. Ticer helped by pointing out that Guillermo was running about the same pace as we were. He never said anything negative about my situation even though there were plenty of things on the list of negatives. I also started thinking of other goals, like catching Dave to hopefully get into the masters age group awards and switching to a time goal of breaking 20 hours. Both of which I still had a chance to achieve.

So we continue plodding to highway 49 and when we get there at 11:33pm we now have our sights on both catching Dave and breaking 20 hours with an 86 minute finish split. I talk with Ticer about splits and we figure if we can get to No Hands by 12:15am we’ll be able to get out in less than :45 and break 20 hours. Ticer gets in front on the climb out of 49 and we soon seen Dave. He’s not very happy and my words of encouragement to run with us to break 20 do nothing for him. After the short climb I get in front of Ticer and start running pretty hard down the hill. A couple minutes later we see more lights and it is Jon Olsen, slowed by stomach problems. He is so positive when we pass it is amazing. Here is a guy who was running in the top ten all day who had to hold up at highway 49 and is now walking downhill. He tells me good things about Jeff and congratulates me on *my* run. What an amazing guy.

Twiet gives me my finisher’s medal, congratulates me on my run, and asks what took me so long. I tell him I was expecting to catch all the carnage late until I realized that I was the carnage! Jeff and AJW are there and tell me they ran 17:20 and 18:22 for 4th and 9th man. That was pretty cool. Congrats to both of you.

Thanks to Chris, Ticer, Greyson, and Renee for crewing and pacing and to the others out there who helped out at the aid stations. Thanks to Sunsweet and Sporthill for continued support. Thanks to the great group of runners I get to train with in Eugene. I hope to get back in the race next year to go for buckle #6.